The Weekend That Was - This Post is Bought to You by the Letter I...

Yep, that's right, I have gone over to the dark side. I succumbed to the pressure from my iPad to pair it with an iPhone and on the weekend I gave in and did it. 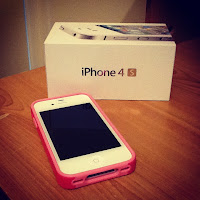 I have always been a BlackBerry girl and to be honest I never thought that would change. But since getting my iPad for my birthday, and my BB starting to do what the last one did, ie. be shit, I decided it was probably time to make the change.

I've only had it for a few days and I am quite enjoying it. I like being able to use Instagram on my own phone rather than having to use Dave's Android or the iPad with it's shitty camera so that is good. Thankfully because I already had the iPad the transition has been ridiculously simple, much easier than any other time I have upgraded my phone from one type to another.

So that was the most exciting part of my weekend. We didn't get up to much as a family apart from shopping and baby-proofing (stay tuned for a post on that on Wednesday!) the house and I managed to get a bit of blogging time in as well.


Saturday night my girlfriends and I had our first Girl's Dinner since October last year, while Kelly and I were both still very pregnant and i was a really lovely evening. Well, until the very end. I won't tell the story, Kelly has done a much better job than I have of telling that story and it's really hers to tell. I will say though that there was spew and a garden bed. But it's not as trashy as it sounds I promise. I think Kelly would have been much more excited if it was trashy and not passed-on-from-children stomach flu!

But anyway, I had a great time, it was really nice to go out with the girls and as Kelly said, be ourselves for the night, and not just someone's Mum. I know I really needed it and I am so bloody glad that I have such awesome girlfriends that I can share good food and great laughs with.

So that was my weekend, how was yours, get up to anything exciting? And most importantly, what apps do I just have to have for the iPhone?