I Gots me an iPad!


So I got an iPad for my birthday! 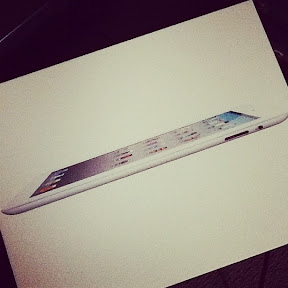 And I absolutely LOVE it! I have hardly used the laptop since I got it. It's so much easier to jump on Facebook or read blogs from the iPad rather than having to fire up the lappy, and it means I can do those things much easier while feeding Mia during the day and before bed.

Plus I can play games on it too, especially on the drive over to Mum's place (about 40 mins).

Dave won't admit it but I think he likes it too. Who wouldn't! I've already introduced him to a game that he has become obsessed with and ended up downloading to his HTC phone, A Monster Ate My Condo. The most ridiculous, hectic game I have ever played. But fun!

Turns out being 30 ain't so bad.....well, if the technology, food and cocktails are anything to go by!

So, any suggestions of cool apps I should get?

Jackie K said…
Hi - visiting via Dr Bron.
I like my iPad too and often think I wish I had had my iPhone and iPad when my girls were babies. They are miracles!
My favourite apps are the reading aggregators like Flipboard and Zite; the essential Twitter and Facebook, and Kindle for ebooks. I also use IMDB, Village Cinemas (to book movie tickets), AusPostcode, and a Flashlight app.
Some great ones too (though they are big) are Nasa, Pocket Universe, Planets and Night Sky.
Games: I'm addicted to Fairway, Cat Physics, Temple Run and Jungle Crash. My kids love Toontastic, and Angelina Ballerina and Hello Kitty games. A lot of the kids' games are annoying though because they are free but constantly prompt you to buy things you can't do in the free version.
Have fun!
2 November 2012 at 12:42

Mama Stylista said…
Hi Mrs P, I love IPads! My husband has one for work and I nick it off him all the time. I haven't used any apps on it yet but it's lots of fun regardless. I hope you're still enjoying it!
2 November 2012 at 12:49

Krystle said…
Woohoo!! Happy Birthday! I'm going to download that game to my phone later. Can't think of any app recommendations. I like dream heights, but am not sure if it's available for apple... and Angry Birds.
2 November 2012 at 13:54

Sharron said…
Hi, visiting from Dr Bron. That is a fine birthday present, I am just contemplating buying my first iphone.
2 November 2012 at 14:12