While I was pregnant with Punky I put on quite a bit of weight. 20 kilos to be exact. Which wouldn't have been so much of a problem if I had been a decent weight to start with, but as it were, I was about 15 kilos overweight and trying to lose it. I will admit though that I wasn't trying all that hard. 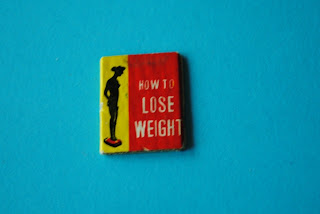 Since Punky's birth I have lost almost all of the weight I put on, with only 3 more kilos to go. I lost 9-10 kilos just by having her and the rest has been coming off slowly.

I started doing an hour of yoga on a Monday 6 weeks ago and since then I have lost 3 kilos which I'm pretty happy with, considering I haven't been making a super special effort with my eating.

But now I feel it's time to try and amp things up a little. I'd really like to get things moving and pick up the loss from about 500grams a week to about a kilo a week. I'm going to try and start walking a minimum 3 times a week, as well as doing the yoga on Mondays, and I also want to find a decent workout DVD that I can do while Punky is having a nap on the days I don't or can't (due to rain, etc) go walking.

I have a big job ahead of me, with at least another 17-20 kilos to lose, but I'm confident I can get there. Unlike other times, I'm taking it slowly, not trying to lose a lot in a short period of time, and not letting myself get impatient to lose the weight quickly.

My goal is to have lost all but the last 5 or so kilos by Punky's first birthday, which I think is doable. Punky is almost 4 and a half months now so that's almost 8 months, or about 30 weeks. Considering I put on 16 of the kilos I gained while pregnant in the first 26 weeks, I hope to be able to do it.

I've started loosely following the gestational diabetes eating plan again and trying to incorporate a lot more veggies and healthy stuff in to my diet, because I figure I need to eat in a way that is practical, easy and healthful, and that, when she is old enough, will set a good example to Punky.

She's my biggest motivation for losing this weight and getting back to a healthier size. I want to have more energy and freedom of movement as she moves into the stages of being able to get around herself, so that I can keep up with her. I also want to make sure that I am as healthy as I can be, so I'm around for the longest time possible for her. After having gestational diabetes I am at an increased risk of developing type-2 diabetes down the track and that's something I'd really like to avoid. I'd like to avoid having GD with my next pregnancy too, so losing the weight and getting healthy now will help me with that (I hope!). I also want to make sure that I have a healthy heart.

My other motivation is that I've asked to bridesmaid at a friends wedding next year and I would love to feel my best in a pretty frock and not feel like I'm uncomfortable or anything while up there in front of so many people.

So that's where I am at right now.

Any suggestions on other ways I can incorporate exercise into my day, or any exercise DVDs you've found good or helpful? I'd love to know.

Amy xxoo said…
I put on 9 kgs with Flynn, but because he was a nightmare sleeper and a super breastfeeder ( almost 2 hourly until he was 9 mths ) i ended up putting on another 5 kgs before he turned one. After seeing a pic of myself with him at Xmas i was determined to lose at least 12 kilos before my wedding - which i managed to do just by eating more vegies, less carbs and trying to take more steps during the day.
Now i'm 19w2d into this pregnancy and i've only put on 3kgs - so i'm hoping i can stay on track for a small weight gain but lose some of it this time without putting more on!
5 April 2012 at 20:04