The Longest, Most Amazing Day of My Life 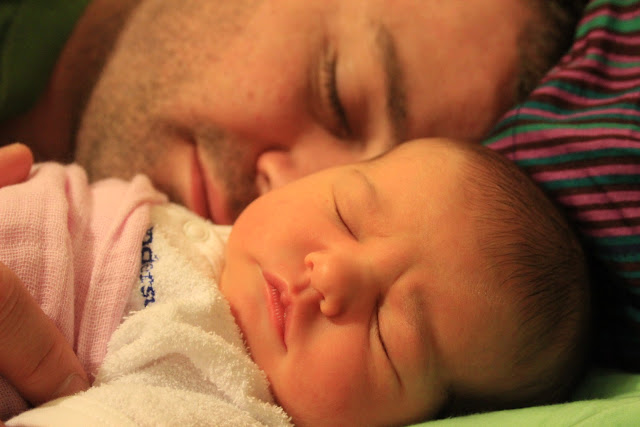 This is the story of the most amazing day of my life...

On Monday 21st November I had my final OB appointment before my due date (23.11.11) at 10am. I was 39 weeks 5 days pregnant. He examined me and said I was about 2cms dilated already. I was pretty happy about that, needless to say. As I said to Dave, I was 20% of the way to fully dilated! He wanted to book me in for an induction at 7am on my due date, Wednesday as he was worried about the size of bubs because of my gestational diabetes. However he was pretty confident that I would go into labour before needing the induction, but he booked it anyway, just in case.

So I woke up on Tuesday morning the 22nd November around 7am with contractions that weren't too intense and around 10 minutes apart. Spent the rest of the day sitting on the fit ball and wandering around the shops with Dave, trying to help move things along as the contractions seemed to just come and go throughout the day, without much rhyme or reason to them, some worse than others, but mostly bearable.

By 10pm that night however they'd really started to pick up in intensity and frequency, varying between 5-8 minutes apart. I pretty much sat on my glider chair, breathing, rocking and counting through each contraction. Dave mostly did Sudoku puzzles (I knew he'd become addicted once I taught him how to do them!) and tidied up around the house.

By about 2am contractions were really starting to become intense and close together and Dave was a real help, counting through each one for me. I found the counting helped to keep me focused and not panic or anything from the pain, plus it was a good indicator to me when one was about to finish so I could look forward to that.

At 3am I felt like I was ready to go to the hospital, I didn't feel out of control, but I felt like I needed to be somewhere with people who had been through this before and could tell me how everything was going. I said all along that I wanted to try and stay at home as long as possible and it's like my body kind of knew when it was time to go. Plus I wasn't really looking forward to having contractions in the car so I figured the sooner we left the better.

We got to the hospital about 3am and I stood out the front of emergency breathing through a contraction while Dave parked the car and grabbed the bags. A security guard escorted us to the maternity ward through emergency. He asked me if I wanted to take the stairs or the lift. My answer "You don't have to wait for stairs". So up the stairs we went and were directed straight to the delivery ward.

Kirrily was the midwife on duty and she showed us to our birthing room and waited patiently for me to breath through another contraction. She then asked me if I'd prefer to stay in my clothes (I was wearing trackies and a pink top) or if I'd like a gown. I chose the gown. I knew things were gonna get messy and didn't want to have to bother washing and soaking clothes when I got home.

I climbed up on the bed so the midwife could get a monitor on my belly to see how the baby was doing and as I got up there my waters broke. Best timing ever. Dave's comment was "Thank God that didn't happen earlier, you would have ruined the glider!". I just looked at him and the midwife laughed. She got me set up on the baby heart-rate monitor and then went out to start getting paperwork ready.

The contractions were really ramping up now and I started to find it harder to deal with them being stuck on the hospital bed with the monitor strapped to me. When Kirrily came back she asked if I wanted to try the gas and air and I was like "Yes please!" I swear, it did nothing but dry my mouth out and make me feel a bit like I was stoned or tripping out or something, the pain was still there, but at least it gave me something to bite on! Poor Dave was doing his best not to cringe with every contraction as I squeezed his hand so hard and he counted through everyone for me as I was past the point of being able to count myself.

Kirrily came back to do an internal examination and take off the monitor about 45 minutes after we'd arrived and I said I was hoping for a big fat 10! Unfortunately I was only 5cms dilated, but she said my cervix was nice and ripe and progressing really well. Small comfort when you suddenly think you've still got hours more of the pain to go!

It was at this stage that I started to really feel like I was losing control of the pain, the contractions just seemed to be getting stronger and stronger (if that was possible!) and closer and closer together. When Kirrily next came in I told her I wanted an epidural but she suggested it might be a good idea to wait a little longer as it might slow things down. She left the room and came back a few minutes later and I told her I really needed something for the pain and she asked if I would like to try some morphine. I said yes, anything, just make it hurt less!

However, before she'd even had a chance to organise any kind of pain relief I suddenly felt the most overwhelming urge to push. I said to Dave "I gotta push, I gotta push" and thankfully the midwife walked back in the room at that time and I told her the same thing. The contractions were just coming one after the other and it felt as though the only thing that would help would be to push.

She was a bit skeptical so said she would examine me again, as it had only been about 15mins since she'd last checked and I was 5cms. Sure enough, she had another look and I was fully dilated (Thank God!). She asked me if I'd had a baby in a previous life as that was the fastest she'd ever seen anyone go from 5 to 10cms with their first baby. I just asked her to Get. It. Out!

She told me to start pushing if that's what I wanted to do, then ran out to ring the OB so that he would get there in time and wouldn't miss it. About half an hour before this I'd messaged my Mum to let her know that I was in the hospital and it was all systems go and it turns out she was awake and jumped straight in the car to come over. Good thing she did too, as she had to get from Campbelltown to Windsor (about a 45 min drive) and somehow she made it with about 15 mins to spare.

I pushed for about an hour and a half and it was probably the longest hour and a half of my life. I don't know what I would have done if Dave wasn't there, I could not have done it without him. He just kept telling me what a good job I was doing and that I was almost there, and it was hearing his voice that stopped me from being totally freaked out by the entire situation.

Finally, at 6:05am, 2 and a half hours after arriving at the hospital, my beautiful little Punky was born. It was the most surreal thing when they handed her to me, I just couldn't believe she'd come out of me! The look on Dave's face was one of pure amazement. Neither of us cried, we were both just so overwhelmed that we had somehow managed to make this little wriggling baby and that I'd pushed her out! I just could not take my eyes off her.

It took the OB about 40 mins to stitch me up as I had a torn perineum as well as internal tearing as Mia came out with one arm up around her head with the umbilical cord all wrapped up around so it wasn't ideal and did a bit of damage, something I'm sure she will hear about for the rest of her life! Lol!

My Mum was blown away by the whole thing and I also think a little overwhelmed as well, it being the first time she'd experienced childbirth from that perspective and not being the one actually giving birth! Dave's parents got there about an hour after Punky was born and needless to say they were pretty excited!

It was one of the most amazing experiences of my life, one that I know I will never forget. It's true when they say that the memory of the pain fades and dims, because if it didn't, I couldn't write this story now. I must admit for the first day or two afterwards I think I was in a little bit of shock, it's weird how something so amazing can also be a little bit traumatic when you stop and think about what actually happened and the pain you went through. After going through that, I'm not sure if I would like to go through it again without an epidural, but ask me in a couple of years, when we decide to have another one and I'm sure I won't even care, I'll just want another baby! Because holding that little baby at the end of it was the ultimate prize!

I think one of the best things about having Punky is seeing Dave as a father. It's the most beautiful thing to see. He is just so in love with his little daughter, he just can't get enough of her. He is willing to do anything, change the dirtiest of nappies and is more than happy for me to express a bottle of milk during the day so that he can get up and do one of the night feeds. In the 9 days since she's been alive he has copped exploding poo and projectile vomit all over him and it hasn't fazed him once. If it's possible I'm even more in love with him now than I was before. 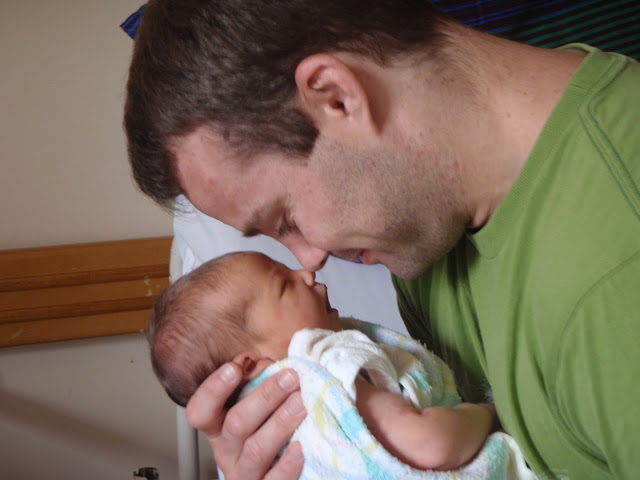 And needless to say, I am so in love with my little girl, I just can't get enough of her and just think she is the cutest thing I have ever seen in my life! If I could I would just sit and look at her all day. So would Dave!

Amy xxoo said…
I love birth stories! I'll admit i almost teared up there for a minute, and a had a laugh at the " get.it.OUT! " - because i did exactly the same!
And i think its freaking incredible that a womans body instinctively knows when they need to push, without having to be told. It just "knows "...
I know i said so before but i'll say again - thats a gorgeous little girl you have there. She's such a cute little puddin' pop, especially in that first pic!
3 December 2011 at 08:19

That's such a wonderful story even if you felt a little overwhelmed by the pain toward the end.