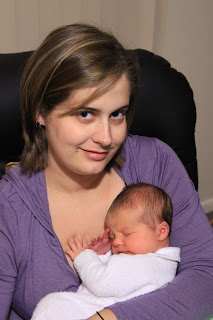 I had no idea that you could run the gamut of so many emotions in a 24-hour period. Every day has been a combination of incredible joy, love and happiness, worry, guilt, anxiety and irritation.

Joy, love and happiness don't need much of an explanation. I can't believe how much love I have for this little girl I've been lucky enough to be blessed with. She changes so much everyday and I wish I could record every minute so I don't forget a thing.

However of course there is a flip side to those good feelings, and I suppose if you're a mother those other emotions don't really need much explaining either.

There is so much conflicting advice out there about the best way to do things and while one thing might say you should be trying to do things in a certain way, others say just go with the flow, follow your child's lead, etc.

Because of my control-freak-perfectionist tendencies I find it really hard to just 'let-go' and to not have any kind of routine or basic set of rules to follow. And Punky is so all over the place that I don't know how I would even go about starting up any kind of 'routine'. My heart tells me not to worry too much about a routine anyway, so I am trying to listen to that. She's not even three weeks old yet!

One day she'll have big long feeds and then sleep for longer periods, but then other days she'll only have shorter feeds and sleep for shorter periods, making those days just feel like all I am doing is constantly feeding her! She seems to want to feed on average though between every two-three hours, which is totally normal, but I just had no idea how all-consuming breastfeeding would be. Sometimes it feels like all I am is a mobile milk machine and all Punky wants me for is to feed!

One good thing is we seem to have gotten the hang of breastfeeding pretty good. She latches on well most of the time (sometimes we have a false start or two) and she seems to feed really well, but it is still a bit all over the place, sometimes she'll feed for 20mins, other times only 10mins, but I have no idea if the difference is because she is just having a lazy feed sometimes and taking her time and other times she is really hungry and gulping it all down all what. I haven't had a chance to take her to get weighed again (will be doing so this week) but I know she is definitely gaining weight so I'm not too concerned.

Guilt, anxiety and irritation - This has all come about because of her seeming dislike for wanting to sleep in the bassinet and the fact she finds it harder to get to sleep at night. The last couple of nights she has been quite fussy and crying, right when it's time for bed after feeding (usually some time between 10:30pm and midnight), she'll pretty much fall asleep right after having a feed, but as soon as I put her down in the bassinet she's waking up and won't settle and it takes ages to get her to sleep again, even though the rest of the time throughout the day (and the early hours of morning) she has no problem nodding off to sleep. I'm still trying to figure out what the problem might be, and tomorrow I plan on tidying her room and clearing her big cot and seeing if she'll be happy to sleep in there. And if she is then she might be making the transition from bassinet in our room to big cot in her room a lot sooner than I thought (or want!). But if she's happy to go to sleep in the cot, then so be it.

Anyway, this post ended up being a lot longer than I expected or anticipated. I'm loving being a Mum, I knew before that having a baby was going to be an overwhelming experience, and one that is a lot of hard work, with huge rewards, but it's true that nothing can really prepare you for how much hard work there ends up being and the emotional roller coaster you'll be riding. But I will say, I'd much rather be doing this work than any other coz the pay-off, having such a gorgeous little girl, makes it all so worth it in the end!

Amy xxoo said…
Oh Kylie - you remind me so much of myself almost two years ago ( 2 weeks til Flynns 2nd birthday )!
I think one of the best things i did when he was first born was to keep a diary of his feed and sleep times - i got one in my "new mums " bag from the hospital. It was basically set out as a big timeline, so i could mark the start of a feed and the end, highlight that block, mark the start of a sleep and end, high light a different colour, and the space in between was awake time.
It helped me to see if a pattern was developing, so if you wanted to set up a routine you could, and helped to know that " ok, he usually sleep around this time, i can jump in the shower ".
Good luck and make sure you keep us in the loop, ok?
13 December 2011 at 07:34