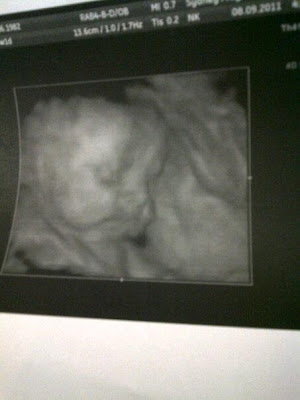 We have a Chubby Bubby!

This scan was done at 29 weeks (almost two weeks ago now) after I found out I had gestational diabetes (GDM) and the OB wanted to check on how bub's growth was going.

Safe to say it's not gonna be a small baby, bubs was measuring on the above average side for most measurements at that age, which the technician said was pretty common for the babies of mothers with GDM.

I've been sticking to a strict diet and it hasn't been too hard to be honest, I actually have to eat more than I was before (albeit no chocolate and sweets or junk food!). I have to test my blood sugar levels 4 times a day and I was a little worried at first that pricking my fingers would hurt, but it so doesn't.

The bad thing about it all though is that I have to be so obsessed about food and what I'm eating and when I eat. It's really kinda exhausting, the days are flying by because I'm just living from one meal to the next (6 a day!).

The other bad thing is that if I get a high result then I feel a bit like a failure and it gets me a bit down. I know it's not really my fault, especially now that I am following the diet so well, but it's hard not to feel a little depressed. I've only had a couple of higher than allowed results (BSL has to be between 4 and 7 for GDM whereas with normal type-2 diabetes you have a little more room to move) but it still gets me down and I'm scared of what the GDM doctor will say when I call her tomorrow with my results. I really don't want to have to have insulin injections or have this baby get any bigger than s/he should be!

Amy xxoo said…
Mother guilt already ( and your baby isnt even born yet )!
It sounds like your doing a brilliant job - like you said, its not your fault and you're following all your doctors advice. Just keep in mind that every pregnancy is different, every expectant mum has her own worries, and that you are almost at the end.... not long now til that chubby bubby makes an appearance!
20 September 2011 at 07:13

Talia said…
Hope you get good readings in the future! And what a cute little baby you already have!
21 September 2011 at 16:43