I gotta say, Elle MacPherson must have one of the most ridiculous accents around. 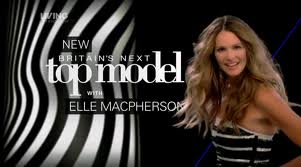 She's hosting the British version of Next Top Model and every time the ad comes on tv I just cringe. Its' so strange, a weird hybrid of I don't know what!

I found it really distracting when she was on Friends too, I don't know why, but it just gets to me.

Kylie Minogue's is getting worse every day too!

I reckon they should both just switch to a straight-out British accent. No-one would blame them for having a British accent when they've lived there for so long, it's to be expected.

Still, I suppose it's not as bad as our PM's!
Labels: Irritations

MultipleMum said…
I agree!
I think they call it an 'international accent' but it is an assault to the senses.
Thanks for the giggle :)
25 January 2011 at 19:59

Kellyansapansa said…
You are so right - that hybrid accent is just plain annoying!
29 January 2011 at 21:14

Thanks for your kindness on my blog.