Monday Night Musing - Chicken In A Can

Last night when I got home from the show and dinner I discovered that the tape Dave had left recording the Masterchef finale for me had stopped. Well before the end of the show. So of course I jumped on Twitter to find out who won (for the record, I'm sooo glad it was Adam although of course I would have preferred Alvin or Marion to win).

Anyway, while I was scrolling through the Twitterverse on my phone I saw a tweet from someone (I can't remember who, if it was you, please let me know!)  along the lines of this -
"Chicken in A Can. Heinz, that's gross!"

And it made me remember something that happened last weekend.

Anyway, when Dave got back and was putting things away in the cupboard (which is usually a job I try to do myself, for some reason it's almost impossible for him to put everything on the right shelf...and it's got to be on the right shelf, there is a certain order!) he mentioned something about Chicken in a Can. I had no idea what he was talking about as I wasn't really paying attention and I thought he was making a joke. But later on, when I opened the pantry I was confronted by this! 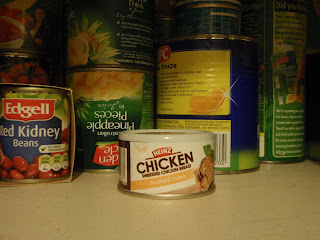 Yes, that's right. Chicken in a Can. He wasn't joking!

All I can say is YUCK! I haven't tried it, but Dave assures me it's not too bad, but there is just no way I could bring myself to eat it! It's almost as bad as the Candwich!

Would you eat Chicken in a Can?
Labels: Food Life Mr.P

Rachel said…
WOW chicken in a can, goodness who thought of this idea.... it doesn't really make the taste buds jump to attention now does it .... the thing is we will now never know what its like if you don't give it a try ... I would try it but I don't think we have it here... I'm of to do the grocery's in a few so I'm gonna see if we have it here... it could be the "Chicken in a Can Tasting Tuesday" lol
26 July 2010 at 22:19

Amy xxoo said…
I've seen that on the shelf and, i gotta say, i'm curious. I dont think i would ever independently try it, but if someone told me it tasted ok i might give a little forkful a go...
27 July 2010 at 07:22