Asylum Seekers are not Illegal Immigrants

I am so over this stupid bullshit 'debate' about asylum seekers. 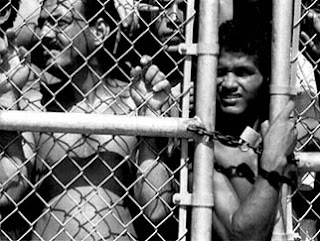 These poor people have absolutely nothing and are taking the most extreme, and I would bet, in most cases absolute last, measure to flee the persecution and horrible conditions of their homes, in the hopes that they will somehow make it to a country that might bother to show an ounce of compassion for the suffering they have gone through.

And woe betide the poor buggers who end up heading towards Australia with the ignorant attitudes of some of the people that live here.

I managed to catch a bit of Hack on Triple J this afternoon and my blood has been boiling ever since. This ignorant so-and-so just starts mouthing off about how they shouldn't be allowed to come here, they take our money (ie. the taxes we, the people, pay), and the government gives them more support than they do the people who come from here. It's not fair, she says. When questioned by the interviewer about whether or not she's ever though about the pain and suffering a lot of them have been going through to have to flee their country in the first place, she said yes.

What a load of bullshit. Her but? It still doesn't matter what they've been through, the government should look after us first. I sincerely hoped she was listening to the program and heard the stories of two people who came here as asylum seekers from Afghanistan and Sudan, what they've been through and how it actually feels to have to go to the length of fleeing your country, resorting to a people smuggler (because the Taliban ain't gonna let you leave) and to then have to live in what is basically a prison with the constant fear that you could be sent back any day.

I'm sorry but that attitude just makes me so angry as it's just not true, but sadly there is a large majority of Australians who seem to think like this. If anything, the government needs to give these refugees more support than they currently do. They are human beings. Some of them have experienced some of the most traumatic things a person can, they need our care and understanding. It's not the poor children's fault they were born into war-torn, persecuting countries anymore than it's her fault she was lucky enough to be born here to what I assume (obviously I don't know her) is a good family. They didn't choose their life, should we just send these children back to a country where their parents are likely to be tortured and murdered, leaving them orphans, and more than likely destined to end up the same way?

Yes, you get problems with some of them. But maybe we need to stop and ask ourselves why? A lot of people point towards some elements of the Sudanese refugee community as an example, and I say, if any Australian had had to witness some of the things that these poor kids have had to in Sudan, they would think differently and maybe have a little more compassion for their fellow human being.

People that arrive here seeking asylum on boats are even more desperate for our compassion and what do we do? We ship them off to some other country, in the hopes that 'out of sight, out of mind' will prevail and the Australian public won't hear their stories or have to feel guilty about locking up a bunch of people for no reason. When the media is carrying on about all of this, and Gillard, Abbot and Co., are spinning their yarns, where are their voices in all of this? Why are we not hearing from the very people who are coming here on boats? Why?

Where has all the love gone? Why are we so worried about a number of people that in the grand scheme of things amounts to a very small precentage of people who come here each year? Why are people so against helping people less fortunate than them and intent on limiting what is a recognised human right?

Bill said…
PJ O'Rourke - a man not known for being a bleeding heart - said of people seeking asylum in Australia, that if they are prepared to risk their lives to come to this particular country, then those are people worth having.

Labor's lurch to the right is a huge mistake. They're trying to appeal to people who wouldn't vote for them anyway. Where is the leadership?
7 July 2010 at 22:49

Amy xxoo said…
I'm not against refugees coming here, but i also dont believe that every single person on those boats is a genuine refugee either. Thats why we need to process these poor people - to sort the the suffering from the liars.
Like this Hack person though i often wonder why refugees ( just as an example ) get put up in motels and have everything catered to them when thousands of Australian citizens have to wait on housing lists and have to sleep in cars or in parks with their children, waiting their turn?
8 July 2010 at 09:04

Unknown said…
I feel the same Kylie and am often yelling at the tv or the radio when this comes up.
Read a very interesting article over at mama mia just the other day that had some enlightening facts that helped cement my views as not just fluffy but correct.

Anonymous said…
I read the same article on Mamamia, and the facts were just mindblowing.

In my eyes, Julia Gillard has done her dash already. A hypocrite and a puppet. I read this article yesterday and I couldn't agree more - http://www.dailytelegraph.com.au/news/opinion/the-gillard-solution-is-to-spin-a-web-of-lies/story-e6frezz0-1225888665051

Kylez..aka...Mrs.P! said…
@Bill - I'd have to say I'd probably agree with O'Rourke on that! And don't even get me started on the Labour government...or any of them for that matter!

@Amy - I totally agree that not every one of them are legit, I just think there has to be a better way to treat them. I also think that the government needs to be focusing a lot more on the housing needs of our citizens and more assitance for those people are needed. What annoys me though is there are plenty of Australians rorting the welfare system and taking away houses and other such stuff that are needed by much more needy people and I would much rather that money be spent on people with a genuine need, our own citizens and those that have had to flee from another country.

@Holly - It was good to see something that dealt with a lot of the facts and figures. While not all asylum seekers are genuine, the large majority are and my heart goes out to them. Thanks for the link, I shall check it out!
8 July 2010 at 20:11

Bill said…
Amy, with respect, this is why we have to separate the facts from the paranoid bullshit. If people really wanted to jump the queue, all they would have to do is marry an Australian pensioner.

A personal example: My wife is American, currently still living in the US. We are going through the visa application process at the moment. She could quite legitimately come in on a tourist visa, then get a bridging visa while we apply for permanent residence. Some friends have done it that way, but we decided for our circumstances, it was better that she apply for the permanent visa from outside Australia. Given all the hoops we will have to jump though, you can see why I have a bit of a grudge against mail-order brides, but I digress....

We would dearly love to shorten the process, but one option we never considered was for L to make her way to Asia, get onto a rickety boat with 100 other people and risk her life on the open seas in the hope she might wash up in Western Australia. For anyone to even consider doing that, they would have to be desperate and without other, more reasonable options. Anyone who suggests otherwise (and I'm not saying you did) simple defies logic.

Obviously we can't just have an open-door policy, or criminals really would get in. But equally, when we participate in a war in Afghanistan, we have a moral obligation to accept refugees from that war, just as we took in Asian refugees in the 70s and 80s. The solution is to set up processing in Afghanistan. We have a presence there, and it would show the genuine refugees where the queue actually is.

I agree that we should look after our own disadvantaged and out indigenous people, but I don't think it's an either/or option. We're big and clever enough to do both.
8 July 2010 at 20:15