So today is our third full day in Anaheim, and my feet are killing me! We have spent the last few days doing the Theme Park thing, with one more (Universal Studios) to go tomorrow. But let me back up a bit first.
Before arriving in Anaheim we had three nights in Niagara Falls followed by two nights in Las Vegas.
Niagara Falls was amazing! We absolutely loved it! Mr.P and I both agreed that if we were going to live anywhere else but the Hawkesbury, it would be Niagara Falls. On the Canadian side! Canadian people are all so lovely and friendly!
When we arrived in Buffalo we hired a car to drive over the border to our beautiful hotel, Sheraton on the Falls. This was my first time driving on the 'wrong' side of the road, and I am proud to say, I didn't drive on the wrong side once! We made it to our hotel with only one wrong turn (which we could do nothing but laugh about, especially when we had to go through toll booths again to get back in the right direction! Lol! I blame the sat-nav), and after deciding to pay a little bit extra, we got upgraded to a King Room with jacuzzi on the 20th floor. It was amazing! We had the most awesome view of the Falls from our balcony, and the best seats in town for the fireworks over the Falls on the Friday night. So worth the little bit extra!
We did the usual touristy stuff in Niagara, the Maid of the Mist (very cool, although probably didn't help my cold, but I did not care, it was just too good not to do! You get on a boat that goes right up to the bottom of the Horseshoe Falls, amazing!), we went Behind the Falls, which is also very cool, where you go down to some tunnels that have been blasted out directly behind the falls, and also a viewing platform which is right beside the Horseshoe Falls. It was really cool feeling the power of the water from down there. 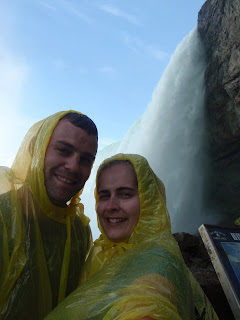 Amy xxoo said…
I am soooooooo jealous of all this tripping around your doing! Sorry to hear that you didnt enjoy Disneyland - i went to Disneyworld ( over in Florida ) when i was living in the States and i loved it. It really did fulfill all those dreams i had as a little kid!
12 June 2010 at 15:52

Kellyansapansa said…
It sounds like you're having an amazing trip!

Kylez..aka...Mrs.P! said…
To be honest, I think Mr.P's opinion tainted my experience a little bit, but it was def a dream come true to go somewhere that I have always wanted to go since I was little.
13 June 2010 at 12:35