I can't believe we are basically half-way through our trip already! We have been havign the most fabulous time! We managed to pack a fair bit in to our days in NYC and we've just spent two lovely days in Niagara Falls. Tomorrow we head back over to the US and Buffalo airport to catch a flight to Las Vegas!
The only bad thing I have to report about Niagara Falls is that I have somehow picked up a cold! Not Happy Jan! Who knew so much stuff could come out of one nose (I'm sure you're all delighted with that piece of info but I just had to share! Lol!)
So what did we get up to in NYC?
On Saturday 29th May we went to Madame Tussads wax museum (those things are realy creepy! So many times I mistook one for an actual person!), it was pretty cool after I got over the creep factor and Dave enjoyed giving George Bush an uppercut! He pretty much gave every one that he hated an uppercut! And let me just say that the wax version of Paris Hilton looks more life-like than the real one! 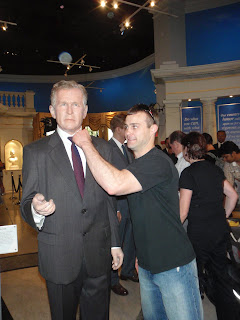 We then went to the King Tut exhibition and Brooke Shields was there! The real-life one, not the wax version! We couldn't take a photo though as there was no photography allowed in the exhibition, but Dave positioned himself so Brooke would have to brush against him to pass, so he was happy, he had his 'brish with fame'!. She is gorgeous in real-life that's for sure! The exhibition was really fascinating and it was mind-blowing when you really though about just how old all the stuff was!
The same day we also went to Central Park Zoo and the Metropolitan Museum of Art. The zoo was pretty cool, but nothing to magnificent, it's no Taronga that's for sure, but they had some really cool seals performing so that was a bonus. 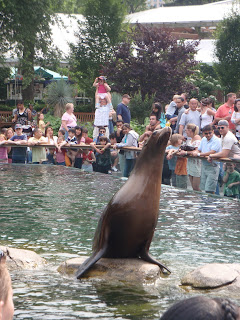 The Met was pretty cool too, although we really should have saved it for another day, by the time we got there we were so tired from walking that we didn't bother looking at everything, just the stuff Mr.P wanted to see (he's more into art than me).
The following day we spent basically the entire day at the American Museum of Natural History, it was so cool! We spent over an hour looking at all of the dinosaur and extinct mammal fossils. Dave was in heaven, and was telling me all sorts of facts! He absolutley loves that kind of thing so he was a bit like a kid in lolly shop, and I really enjoyed it too. It was so cool seeing the huge dinosaur bones that's for sure! 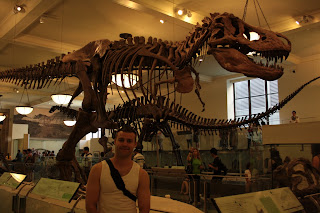 That night we went on a night tour on the Hop-on-Hop-off bus which was really interesting. It went around NYC and Brooklyn and the guide was really funny and knew heaps of cool facts about NYC and it's surrounds. Got heaps of great pics too which I'm sure you'll see plenty of in A Pic A Day when I get back!
On the Monday we went to the Guggenheim Museum...it was ok. Dave thought it was crap. The most impressive part was the building! I took quite a few pics of it! Neither of us are too impressed with modern 'art'. If you can even call some of it art! We are both convinced some of these 'artists' are sitting back having a good laugh at us all! Having said that though the Museum of Modern Art (MoMA), which we went to the Friday before was so much better. I really loved the photography exhibit, there was some really great work in there.
Tuesday we didn't do a lot (in fact, I can't really remember what we did! How sad!) but I remember what we did Tuesday night...we saw Phantom of the Opera! It was fan-freaking-tabulous! I absolutely LOVED it! Even Mr.P enjoyed it, although I had to explain what was going on during the intermission. I saw Phantom for the first time when I was 12 and I was almost in tears I was so happy seeing it again, and by how impressive it was. Man can that Phantom sing! It's my second favourite musical (Les Mis is the first) and it was definitely worth the price of admission!
Our last full day in NYC we did the Circle Line tour around the island of Manhatten and that was pretty cool, got some great shot of the Statue of Liberty with the zoom lens, check out this Pic A Day to see a sample of how close that zoom lens can go! We then  had lunch at Planet Hollywood with the vouchers we got when I booked the Phantom tickets and I must say, they make a mean Caeser Salad! 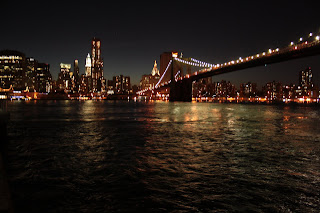 Anyway, I'm sure I've bored you all enough with our NYC adventures so I will head off to dinner now with my lovely hubby and enjoy our last night here in Canada at Niagara Falls (are you jealous yet? Yes I am a bitch, I know!) and will fill you in our Falls and Vegas adventures when we get to LA. If the internet situation will allow that is!
I hope everything is going well for you, wherever you may be, wish you could all be on holidays with us!
Labels: Travels

Amy xxoo said…
I loved the AMNH aswell - even if your not into science-y type stuff, those dinosaur bones are impressive! Glad you enjoyed NYC - like i said, i miss it now living back out in an Australian country town....
6 June 2010 at 12:17

Travelingrant said…
Nice! Yeah, the American Museum of Natural History blew me away, I could have spent days in that building. Though after reading Relic I don't know that I'd want to be walking the halls at night!
7 June 2010 at 08:34

joel said…
Thank you for visiting Niagara Falls. As a tour guide here I've seen an influx of Aussies over the past two years.
I suspect the favorable exchange rate of your currency is a driving force. I've found the Australians to be outgoing and fun. Just don't mistakenly say they come from New Zealand!
Cheers!
Niagara Guide Guy
www.niagarafallswalkingtours.com
7 June 2010 at 08:40

Mel said…
Sounds like a fantastic trip!
I loved Phantom of the Opera too, would love to see it again.

I know what you mean about modern art. I don't understand it!