Today it's Amy from New Adventures in Dreamworld's turn to share with us her fav books. Like me, Amy struggled to pick just 5, it's so hard when there are so many good books out there! Amy sounds like a girl after my own heart, as I struggle to name the same top 5 on any given day! So, anyway, here's Amy's fav books (don't forget to stop by and visit her blog too!) 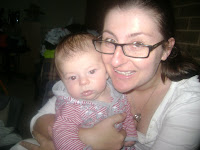 In her own words -

I'm a new mumma to a beautiful almost-5 month old. I was a huge reader as a child but, unfortunately, a horrid English teacher the last two years of high school killed my love of the written word. However, i had a lot of time of my hands when living and working in the US as an au pair back in 2005 and found myself having a new found love affair with books when i discovered " Borders "..... Now i'm looking forward to instilling a love of reading in my son.

Where is your favourite place to read? In your bed, on the lounge? Somewhere nice outside?
My favourite place to read is a tie between on my lounge, at home, snuggled under a blanket ( winter is the best time for reading in my opinion ) and, strangely, at the airport. I find you can get a hell of a lot of reading done waiting to board a flight at the airport - i'm one of these people who likes to get there early ( you know, so as not to miss my flight and end up on " Airlines " ) so i always take a book along with me so i can find my boarding gate, pick the best seat, and get into a good story.

We all know the old addage, 'You can't judge a book by it's cover', but how true do you believe that really is? And, if you can remember (no pressure here, if you can't think of one) what is your fav book cover? Do you have a fav?
I have to admit - i DO judge a book by its cover. Well, initially anyway. See, when i'm browsing the bookstore or the library for a new read, its the cover that initially attracts me. If the cover art is interesting/colourful/"arty" then i'll probably pick it up, read the blurb, and make a decision based on that. If the cover is relatively plain/boring/has a picture of Fabio on it, then its a no go zone for me.

That being said, i'm not really one for remembering covers once i've read the book. The one book cover that does stand out in my mind is " I Know This Much Is True " by Wally Lamb - its has a picture of baby twins on it, in black and white. Dont know why this one has stuck with me - its a good photograph, but i think its because the picture links so well with the story.
And now, to the big question - which books make my Top 5(ish) list. I've thought about this for a week and there are only 3 that i would definately have in my Top Whatever list. In no particular order, those are:

Pride and Prejudice by Jane Austen - a classic? Yes. And for good reason. Namely, just because its so well written and the storyline has been able to translate to audiences across numerous generations and eras. Also, i just really love Elizabeth Bennett - she's headstrong and determined and stubborn and she trusts her instincts, but she knows when to listen to heart. Every story needs a heroine like that. Plus, Mr Darcy, by stories end, is totally hot.

To Kill A Mockingbird by Harper Lee - i first read this in high school and, though i liked it at the time, it was just another text we had to read for another stupid essay. But then, when living in the US and having caught the film on TV, i decided to read it again... well, its humanity both broke and healed my heart. Its not black vs white, or neighbourhood freak vs polite society - at its core i think its a story about love and acceptance, and about the innocence of childhood. Atticus Finch has to be one of my all time favourite literary heroes.

High Fidelity by Nick Hornby - this was the first "adult " book i remember reading and finding funny. Not especially funny in a " ha ha " way, but in a way where i would smirk to myself and think " Oh yea, thats how it is! ". I mean, even though its essentially a guy recounting his past loves and trying to find his way ( back ) to his true love - and i am neither a guy, nor did i have an extensive list of past relationships with which to draw comparison. Aside from the writing, what was the biggest drawcard? The musical references. I was biiiiiiiig into music at the time ( still am, though not to the same extent ) and to have a book set in and around a record store, and a main character who uses songs and albums as his link back to relationships - dude, it blew my mind.

Aside from those three, i've grappled with what to put in the last two places. Definately something by Joanne Harris ( my favourite author ) - but i just couldnt decide what. " Chocolat "? " Coastliners " ? " Gentleman and Players " ? Too big a decision. Which Stephen King book would i pick, if any? I've just finished reading " Duma Key " but could i pick that ahead of " Hearts in Atlantis " or " Dolores Claiborne ". Or should i pick another classic? " I read " Dracula " by Bram Stoker, " Sense and Sensibility " by Jane Austen and " Lolita " by Vladimir Nabakov last year but how do they compare to other classics, both older and modern, that i've read before? So i'll leave the last two spots empty for now. Ask me again in a few years time and i may have come to some kind of decision - or be even more conflicted than i am now...
Labels: Books Guest Post

Sian said…
There's no way I could pick 5 either! High Fidelity is a good book, I've read it a couple of times now. Like you, I found myself nodding along. I don't think it's a big problem to sometimes judge a book by its cover, especially if you're just browsing. Something has to attract you in the first place and that's how I find new authors most of the time.
4 June 2010 at 05:01