So right now as I write this I am sitting in a hotel in NYC after spending the afternoon wandering the city.
We slept till about 11am after going to bed at like 8pm, we were just so wrecked after the flights! Long-haul really is a Long-Haul! Mr.P and I have decided we are never going on another trip that requires so long in flights until they have super-sonic jets! Having said that though, I'm sure after a few more days here in the City we'll be re-thinking that as our adventures start to make the flight worth it (I hope!). At least flying home will be a little shorter, leaving from Hawaii instead. 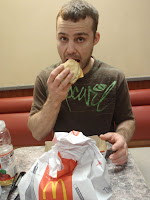 Had to try some Maccas!
First Impressions of the US? From what we've seen it's a lot like Australia really, you don't notice the differences until you start exploring (unlike say somewhere like Fiji, which it nothing like Australia!). It was beautiful and warm when we stepped out of JFK about 6pm, and it took a minute to understand why cars were being driven without drivers...they were on the other side of the car! Thankfully a lot of streets in New York City are one way, so it's not too hard to make sure you look the right way before crossing!
One thing I've noticed that's different from Australia is you can actually take the coat hangers out of the cupboard! I've not been to a hotel in Australia where the hangers could actually be removed from the cupboard! A little thing but something I noticed none the less. 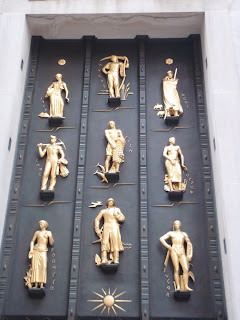 Some of the gold stuff...so many great buildings here, can't wait to take out the DSLR
Spent a bit of time today wandering up 5th Avenue and Central Park, saw some great street dancers at the entrance of the Park, they were really good.
A lot of buildings here have gold plateing? Paint? Embellishments? I dunno, whatever it is, it's cool, looks great. Mr.P loves it and really wants to trim our house with gold now! I'm trying to explain to him that while it looks great in NYC I just don't think that the Hawkesbury is ready for that yet!
Anyway, looking forward to another day of wandering tomorrow so I will sign off and head to bed, still a little jet-lagged, I am feeling wide awake right now as my body is still slightly in Australia-time so need to take a sleeping pill and get some sleep!
Hope all is great back home in Oz for you all!
Labels: Travels

Kakka said…
My daughter just got home from New York on Friday and she so agrees with you with regard to the long flights - we live in Perth so add another few hours. I am sure you will love New York, I have never met anyone who has been there that hasn't. Look forward to reading about your journey.
23 May 2010 at 10:56