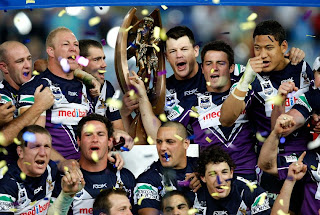 I know, I know, every newspaper and news website in the country has been carrying this story, but I just had to add my two cents worth.

I was absolutely gobsmacked yesterday when I clicked on to smh.com.au and saw the news. It's a harsh penalty, but what else could they do. They've proven to be a bunch of cheaters of the worst kind.

And now, every good thing they did for the League has been ruined and tarnished, and I feel cheated. And if I feel cheated, imagine how the Storm fans and members feel.

And all those kids. All those kids whose favourite team is the Storm, who've watched them play week in and week out and who have looked up to these players, their role-models, men they aspired to play like when they themselves step out on the footy field. How do they feel? What kind of a message or example does it send to these young kids?

I'm not naieve enough to think that there are not other clubs who are rorting the salary cap in their own way, but I doubt it is to this extent. What those at the Storm, who were working this deception have done, is criminal, you can't run two sets of books as a business.

I also don't want to speculate much, but I am really having a hard time believing that the top players at that club didn't know what was happening. Every single person involved in this cheating should be stood down and every player manager and player investigated. I have nothing against players such as Cameron Smith or Billy Slater, but if they knew they were getting these extra payments that were entirely illeagal, then I think they are just as bad, they knowingly cheated. Even if they didn't know the full extent of where these payments were coming from, they had to know they were getting paid more than what the Storm should have been able to afford under the salary cap. What type of person does that? Knowingly cheats fans and other teams, just so they can get the big bucks.

This is a sad day for the NRL, and I hope the people who manage the NRL take a good hard look at Melbourne, and themselves, because there is obviously something wrong if a club feels they need to cheat and lie to this extent, to be a competetive, game-winning team. I don't think the salary cap should be scrapped, but it does need to be reviewed, and changes bought in to allow clubs to retain more of their big name players, in particular those that they have invested a lot of time and money in, bringing them up through the juniour ranks. 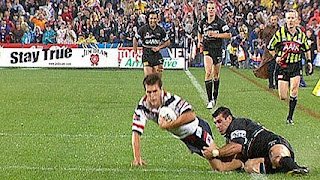 All I can say is "GO PANTHERS!". We've now got an even better shot of bringing home the trophy come the October long-weekend! For me, that's the only good thing to come out of this whole disgusting, disappointing debacle.

Above: One of the greatest try-saving tackles of all time! Best game I've ever been too! (NRL Grand Final 2003 Panthers vs Roosters)
Labels: Irritations Politics n Current Affairs

Kerry said…
Here, here! I grew up in Newcastle being dragged to the rugby each week and while I now longer follow avidly and have had to share allegiance with the Raiders now I live in Canberra, it really ticks me off. That and sportspeople being called heroes...certainly not this week!
23 April 2010 at 12:25

Bill said…
Well, I think I've made my view of football known.

As far as I can work out, the point of the salary cap is to stop a cashed-up team buying up all the good players. So they are right to strip Melbourne of the premierships won while they were cheating, but it brings up a dilemma similar to that of Ben Johnson's record sprint. Yes, he cheated, but the fact remains that a human being has run that fast under his own power. Similarly with Melbourne, they were still a good team - the best money could buy.

The thing that bothers me the most is that for all the drinking and drugs and sexual assault, the thing that has really rattled the league and made people sick is they way a team paid its players too much. It's another example of how footballers seem to live in a parallel universe of law and morality.

Some have wondered how this could go on for so long without anyone noticing.
Melbourne Storm are owned by News Corp, who also have a large interest in the NRL. Any questions?
23 April 2010 at 18:24

Happy Friday! You blogged 4 times today- I am impressed! I sometimes don`t even get in one a day, or sometimes not even one a week (try to do at least a COUPLE of times a week though!)

Karls said…
Being an old Melbournite, I can honestly say most people in Melbourne couldn't give two shits - they are all consumed by AFL. Having said that... i do feel that finally, finally(!) NRL was making some head way in the AFL dominated state... then this! I don't think Melbourne can tough it out through this storm (pun intended). It will be like a photo from your wedding years down the track, and your like 'Who the hell is that? And why were they at our wedding?'
24 April 2010 at 09:43

Lady Grey said…
I cannot add to the Aussie Rugby discussion, except to say that I am a South African Rugby fan and am so looking forward to next year's world cup again... we were the champions last time, but not sure if it will happen again. I understand your passion though ....
24 April 2010 at 21:18