There are many things about Mr.P that make me go Hmmm?
You know how there are those 'man' things everyone talks about, those generalisations of what men do or have, such as the Man-Flu?
Well, quite rightly, Mr.P often accuses me of having a 'Man-Look'. You know the kind, where usually it's the man walking around looking for something, openeing doors and cupboards, looking under stuff, but not really looking? Well that's usually me.
It always seems to happen when we are running late, but I'll be screaming around the house, smashing doors open, throwing things around rooms, swearing at the top of my lungs "Where are my f*%&$ing jeans??? They were on the ironing pile 5 minutes ago" and Mr.P whill calmly walk over to the pile I've just rummaged through 3 times, and come up with the elusive jeans.
He'll give me that smirk and say "Having a Man-Look were you?". And he's loving it. Coz he knows it's the truth. Mr.P always finds the things I'm looking for in the place I've already looked 3 times.
Well last night it was I who was doing the smirking. He spent 20 mins running around the house, out to the car, looking for his wallet. I got up after 10mins and started looking for it tpp, but my heart wasn't really in it. I sort of glanced over the back table and went back to the laptop. 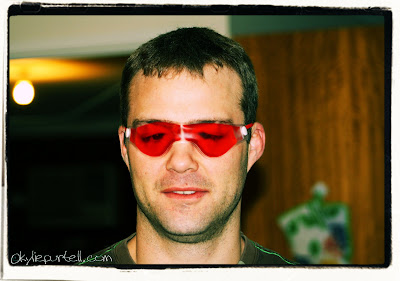 Once I realised 20mins had gone by and he was now 10mins late for work, I got up again, walked over to his work bag, and pulled out his wallet. Just like that.
It was sitting between his lunch box and the side of his bag.
"Having a Man-Look are we dear?"
If looks could kill, I would have been dead and buried.
Dont'cha hate it when that happens!
{Mr.P wearing my gel eye-mask...no he wasn't wearing these while looking!}
Labels: Irritations Life

Kerry said…
thank goodness that was an eye mask...I thought for a minute it was the latest fashion in sunnies!
6 April 2010 at 22:26