The Punch, and why I think I have to stop bothering with comments

Do you read The Punch? I do, but lately it's getting to point where I don't think I am going to bother reading any of the comments on there anymore, which is a shame as that is one of the great things about The Punch, the chance for an open dialogue between people from all walks of life on issues that affect most of us. 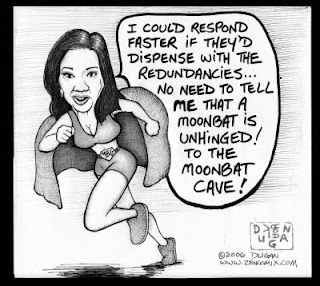 I just don't understand these people who have absolutely no idea what sarcasm or humour is. It just reinforces the need for someone to come up with a sarcasm font!
An example - there is a piece on there today called 'Why stop at binning welcome to country and prayers' by Chris Deal. He is clearly being sarcastic and using extreme points of issue to support his argument. Anyone with half a brain could read his article and see the point he is trying to make. Yet there are still comments on there from people who seem to think that calling for a ban on things like the Anzac Day parade and foreplay in the same article, with ridiculously overstated reasons that are just so obviously being sarcastic, is an actual call to ban Anzac Day and other things. They have completely missed the point, and at the same time made themselves look like the huge, humourless fools they are because they can't understand english properly and read between the lines. (I'm sure these are the same people that write nasty comments to Joe Hildebrand of the Daily Telegraph whenever he dare uses sarcasm or satire in an article!)
I know some people say that sarcasm is the lowest form of humour, but I think it has a place and when used correctly can be an excellent tool for expressing an opinion, or the absurdity of certain suggestions.
My other problem with the comments is that some of the commentors are just so convinced of their point of view that it's almost pointless leaving a comment as you'll just be attacked because your opinion is different, rather than having a discussion between adults with open minds wanting to looks at all sides of an issue equally. I hate the way some of these people cast nasty aspersions on the personal lives of the authors and other commentors just because their point of view is different. It's ridiculous. It's a reason why I've stopped commenting on Mamamia so much. It's just not worth it.
Does anyone else feel like this?

PinkPatentMaryJanes said…
I know what you mean, it's so frustrating. Comments should be an added bonus.
18 March 2010 at 14:22

Bill said…
I really only make a point of reading comments on personal 'blogs. On the mainstream sites, I will post a comment if I have something to say about the original piece and it's usually only then, that I pay attention to any other comments.

In fact, I've just 'blogged about a run-in I had with a commenter who turned into a troll on Twitter the other night.

Irony is an important tool for highlighting the absurdity of certain arguments. Of course it's a bloody ritual that doesn't achieve anything tangible. So is singing the national anthem, so what's your point?

It seems, irony is also important in reminding us how many people out there really don't get it.
At least they're not listening to talk radio.
18 March 2010 at 16:18

Cat said…
I can't even bring myself to comment in the first place, except on blogs like your wonderful one! :) I just don't want to have to deal with dunderheads misinterpreting or getting personal and nasty.
18 March 2010 at 21:03

Anonymous said…
It's usually small people that do the attacking. But still annoying.

I was in a network where I had to notate if I was joking or being sarcastic because I was taken wrongly too many times.

Kakka said…
I only comment on personal blogs, but I have seen some really vindictive people out there who show their real selves to be small minded bigots. I did have one anonymous commenter early in my blogging life who was rude and nasty, but I left his comments there as I chose to have my blog in the public domain.
19 March 2010 at 21:09