...A BlackBerry Crack head (CrackBerry) that is!

My poor little BlackBerry has had to go away to be fixed. For some reason it just wouldn't hold a charge, and it was getting really hot, even when it had been idle for hours. The battery was only lasting maybe a couple of hours, and that's not really even using it! So it's been sent away to be looked at, and I really miss it! I can't believe it!
If you'd asked me a year ago if I considered myself addicted to my phone I would have answered with a definite NO! However, ever since I got my BlackBerry and have started to recieve all my emails (work and personal) to it, and I have it connected to Facebook and Twitter, it's constantly by my side. I hardly ues it for calls or text messages anymore, it's almost purely for email and internet. It being a phone is a bonus! 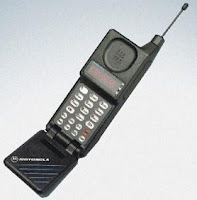 When I was 18 and got my first proper mobile phone (I say proper, as before that I had a brick of a phone from the age of 14 to use when I had to go to the city for singing and had to catch a train, it was very cool in year 8! The pic of the old phone is basically what it looked like but it was thicker!) I was addicted to it. It was a Nokia 6110 (my dad's old work phone, he'd upgraded and bought me my own pre-paid SIM to use in it, and it had Snake 2!) I could burn through $30 of credit on text in a night! After a few years, and as I got older, the thrill of having a phone (remember, they weren't that common when I was 18) wore off and it became tiresome, constantly messaging.
But now, after about 24 hours of not having my BlackBerry and not being able to read my emails like texts as soon as they come through I find myself lost! I didn't realise how deeply ingrained the habit of checking my phone for email was until I caught myself going to check it quite a few times today! I have been given the crappiest loan phone you ever did see, but we got Mr.P a new phone during the week (a Nokia E71) which he has kindly said I can use until my BB comes back. Oh how I love my boy (and Mr.P too! Whatta Man!)
I think maybe it's not so much an obsession with the phone as it is with getting my emails (particularly the emails that send me all the lovely comments you people leave!). How sad is that. Oh well. I blame blogging! Ha!
Do you remember your first mobile phone? How old were you? Are you addicted to your phone or the internet/emails now? I find myself amazed at how reliant I have become on the internet. Perhaps this short break from the CrackBerry will be a good thing (ask me again in a few days!).
{BB Image} {Old Phone Image}
Labels: Life Technology

Melissa {Suger} said…
I had my first mobile when I was 15, back when 15 year olds didn't have phones.

It was a brick of a flip phone and I thought I was the coolest thing ever!

It really was practical though my parents lived 30 minutes from my school and job, i just called when I needed to be picked up.
19 March 2010 at 23:04

Anonymous said…
North Face is the known provider of good high [URL=http://www.northfaceapexbionicjacket.org/#1088]north face apex sale[/URL] women's khumbu jackets. These can be obtained on the internet and on recognized North Facial area retailer stores. It comes in various [URL=http://www.northfaceapexbionicjacket.org/#1178]north face apex bionic[/URL] just like black, grey and even white and simple variations that would suit any woman's need.
22 December 2012 at 12:15

Anonymous said…
Determing the best wool to your outdoor wants is not difficult [URL=http://www.northfaceapexbionicjacket.org/#1033]north face apex bionic sale[/URL] you contemplate that will any North Encounter womens fleece jacket is designed and also examined to satisfy the demands of your wonderful outside.The North Face Base Camp messenger bag will come in the only two measurements you'll need, smaller and huge. When you are looking for a secure messenger bag that may [URL=http://www.northfaceapexbionicjacket.org/#1131]cheap north face apex[/URL] a lot of abuse along with pack lots of things then you've got recognized the proper bag.
3 January 2013 at 14:58