I happened to mention I have a weird thing about numbers and it seems a few of you do too. 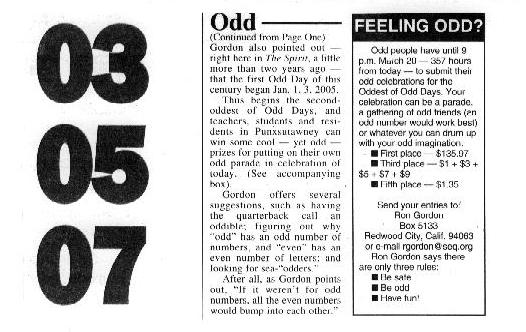 Random Fact #6: Having said that though, I think of the number 21 as being an even number (I think coz it's my birthday, and 21 is a bit more significant than your average old odd number.)

Random Fact #7: I also consider 25 to be an even number coz you can double it to get an even number and it's a quarter of 100...weird and totally not logical reasons I know...I just have a weird brain!

A couple of people seem to share my hatred dislike of odd numbers. And like me, Clarissa says that

I am so like that. When we watch a DVD I have to have the volume on 46 and I will fiddle till I get it. If a plane's going and it needs to be louder? Then 50 (or 52 if it's a really loud plane!) is the next stop! For some reason when we watch DVD's the sound is so low, which is why we have to turn it up so loud. Not because we are hard of hearing. Same with the car radio colume. Gotta be an even number, 21 or 25 (there's those exceptions again!)

My friends have laughed at me for this, because I'm so clucky, but it's not just about it being an odd number year. I also don't want to have a baby in the first 4 months of next year, but I also don't want a baby in the last 8 months of the year, as there are too many birthdays then. So it works out well that we can try to have a baby around the beginning of 2012, which means it's an even number year. To be honest, I don't really care when my baby is born, I just wanna have a baby. But an even year, and the year I turn 30 (but before I turn 30) would be nice! Am I asking for too much? Lol!

missea said…
I understand your feelings towards numbers as well, though perhaps not to the same extent!

My fondest memories are from the even years of my life, excepting only a couple of years. I'm 26 at the moment and believe it to be a good age. I didn't like 25. I worry that I'll be 27 when I'm married, only 3 days off 28.

Vicki said…
You're not mad. I remember listening to an interview about peoples associations with numbers. Some people also see different colours when they think of days of the week or hear musical notes. I wish I could remember more but at 11:36pm my brain has gone squishy.

Odd numbers rule! I won't use any golf balls with an even number on it except #2 (which is prime.) Half the box of balls get hit into water hazzards and off cliffs.
16 February 2010 at 23:39

Bill said…
But you can double any odd number to get an even number.

I can understand the illusion that 21 and 25 are not odd numbers because they are such clear multiples of 7 and 5 respectively. In fact, the aversion described sounds a bit more like a distaste for prime numbers more than specifically odd numbers. 2 is the only even prime number, for fairly obvious reason. Beyond that, 9 and 15 are the only odd numbers under 20 that are not also prime numbers.
20 February 2010 at 11:16