The Year of the Flood - A Book Review 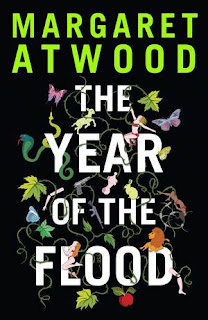 I finished this a couple of weeks ago but it has taken me a little while to get around to writing this review. I blame Christmas!

Anyway, I really enjoyed this book. Set in a possible future world, 2 women are trapped and fighting to survive after a world-wide disaster has left most people dead, and a lot of those who aren't dead soon will be.


The times and species have been changing at a rapid rate, and the social compact is wearing as thin as environtmental stability. Adam One, the kindly leaders of the God's Gardeners - a religion devoted to the melding of science and religion, as well as the preservation of all the plant and animal life - has long predicted a natural disaster that will alter Eath as we know it. Now it has occurred, obliterating most human life. Two women have survived: Ren, a young trapeze dancer locked away in the high-end sex club where she works, and Toby, a God's Gardener who barricades herself inside a luxury spa where many of the treatments are edible. Have others survived? As Adam One and his followers make their way through a changed world, Ren and Toby will each find their way out, leading to the novel's unexpected and affecting conclusion.


The story is told from the perspective of both Toby and Ren. We meet them just after the disaster that has wiped out most humans. As both women are stuck in their respective hideaways, we go back to the beginning, to when they first met each other, and the God's Gardeners. As their story's unfold we learn more and more about how they came to be where they are, and the world they were living in that caused this unthinkable devestation.

This is the kind of story where its hard to warm up to the characters at first, and you spend a bit of time wondering what exactly it is that has happened. Its a frightening reality, one with a lot of parralels to our own world, one that it wouldn't take much of a stretch of the imagination to believe something like this could really happen.

Atwood is obvisouly raising some issues here, one of them being genetic manipulation and experimentation, that science is perhaps going to far. The issue of looking after our planet and not taking for granted the natural plant and animal life. What I like about this book though, is that, rather than being pushy about making a point, she simply tells a tale and lets you make the assumptions yourself, to take away what message you may, without ramming it down your throat and losing the narrative of the story. (This in complete contrast to another novel I read last year, Beauty)

It kept me hooked from first to last page, I needed to know everything I could about Toby and Ren. Atwood reveals just enough information at a time to keep the curiosity high, and the ending is such, that it stays with you for a few days after finishing.

I had a lot of 'what-if' moments reading this book. What if that really happened? What if this is where we are headed eventually? How would I survive if that was me?

I really liked this book. Its different, and you may not like it if you haven't read this kind of dystopian novel before, but if you liked 1984 or the Handmaid's Tale, then you should enjoy this.