The Hunger Games - A Book Review 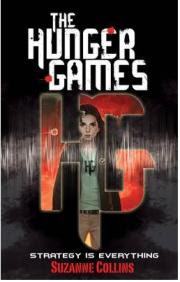 This was one of those books I just couldn't put down.

I first heard about it from a blog (sorry, can't remember who's there were a few) and the consensus was that it was pretty good.

While at the Plaza the night before Christmas Eve I went into Dymocks to look for Oryx and Crake by Margaret Atwood (it was written before The Year of the Flood and has some of the same characters so I am keen to read their beginnings). They didn't have it, so I ordered it, but I saw this sitting on the counter and just grabbed a copy on impulse.

Boy am I glad I did!

In a dark vision of the near future, a terrifying reality TV show is taking place. Twelve boys and twelve girls are forced to appear in a live event called the Hunger Games. There is only one rule: kill or be killed. When sixteen-year-old Katniss Everdeen steps forward to take her sister's place in the games, she sees it as a death sentence. But Katniss has been close to death before. For her, survival is second nature.

Interested? I was. I started reading about 11pm on the 23rd and didn't stop until I'd finished it, about 4am. Katniss is a great character. Maybe a little cold, but when you've grown up with the life she has, you would be too.

Katniss steps forward to take her younger sisters place in the Hunger Games, and thus begins her adventure into the arena. The contestants are chosen from the 12 districts of Panem, the country that used to be the United States of America. Every young person between the ages of 12 and 18 has their name put into a lottery and the girl and boy chosen have no choice but to compete. Not only are they competing for their life, but they are competing for extra food and fuel for their district - the winner is treated is like royalty and will never have to go hungry again. You'll be disgusted when you find out the reason for the Games.

The build-up ot the Games is like the start of a new season of Big Brother, the contestants are all gussied up and put on parade, in the hopes that they will win sponsers, who will be able to send them much-needed gifts of assistance in the arena. Its subtle digs at reality tv are exactly that, but you see the point she is trying to make!

Its brutal, bloody, frightening and incredibly sad in the arena, but in spite of it all, theres still a little bit of love. Or is there?

Reading this book reminded me of the first time I read Tomorrow, When the War Began by John Marsden. That sense of just having to know exactly what was going to happen to them, the suspense, the action, and above all, the believability*. Even though these were two young girls, in very different, extreme situations, you believe that they could really do what they did, even if they were real life.

Katniss isn't the perfect hero, but its her flaws that make you like her even more. And she's a damn sight better than Bella. Young girls should want to be strong and resourceful like Katniss, not moping, self-pitying walk-overs.

I highly suggest you read this book.

A BIG Thumbs Up for this one!

*Believability - is that even a word? You get what I was trying to say, don't cha?
Labels: Books Reviews

Kellyansapansa said…
Ooh - thanks for the review, that sounds fascinating. I read voraciously, so I'm definitely going to add it to my list!
12 January 2010 at 12:55

Kylez..aka...Mrs.P! said…
You so should! I highly reccommend it.
I got the second book yesterday.
Started reading last night and read half
in 3hrs! Can't wait to finish it tonite
13 January 2010 at 17:29