I found this meme over at Fat Mum Slim while I was doing a bit of jumping about on peoples blogs, reading old posts that looked interesting. She got this from Dooce, who got it from Facebook (way back in February), so I thought I might do one of my own. Here goes -

What are your middle names? 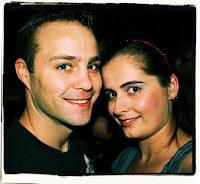 Mine is Richelle and his is William. I used to like my middle name, until I got married. Now it rhymes with my surname, so not so much a fan of it anymore. Although I do joke that I will call my future daughter Michelle Richelle so her whole name rhymes. But that would be cruel.


How long have you been together?

How long did you know each other before you started dating?

2 weeks. We were introduced by a guy I worked with and we met on a night out, 2 weeks later we met up again at Panthers and the rest, as they say, is history.

Who asked whom out?

Neither really, we just started talking on the phone everyday, hung out at his place on the weekends or went out with a bunch of friends. He did ask me for my number though, which is I guess what started it all.

How old are each of you?

I'll be 28 in June and Mr.P just turned 29 at the beginning of December

Whose siblings do you see the most?

Pretty even I spose. We are both one of 5 so usually not all the siblings are home when we to lob to the parentals.
Which situation is the hardest on you as a couple?

Mr.P working night-shift. We don't get a lot of free-time together, so when we do have our weekly day (Saturday) where neither of us has to work we tend to not do a lot. I have had to get used to sleeping alone again and after almost a year I still don't think I'm really used to it, don't think I ever will be.

Did you go to the same school?

Are you from the same home town?

Nope. As indicated by the high-schools, Mr.P is from the Hawkesbury (where we live now) and I'm from Campbelltown (south-west of Sydney), or as I prefer to say, the Macarthur region, or my suburb, St. Andrews.

We're about the same in terms of 'school-smarts', although our strengths are in different subjects, however I am def more tech-smart, Mr.P barely knows how to use facebook and hardly ever does, and when it comes to anything even slightly technical in terms of computer hardware, he's snoring.

Who is the most sensitive?

Where do you eat out most as a couple?

Probably Hogs Breath Cafe for the simple fact that it's 300m down the road!

Where is the furthest you two have traveled together as a couple?

Fiji for our honeymoon

Who has the craziest exes?

Neither. Mr.P doesn't have any exes, and I was never really serious with anyone until Mr.P came along. I liked to kiss the boys and keep them hanging! Mr.P was the only man who could catch me.

Who has the worst temper?

Who does the cooking?

Who is the neat-freak?

Neither of us are, which is not good, our house usually looks like a bomb hit it...newspapers and books everywhere!

Who is more stubborn?

Probably me, although we can both be pretty stubborn sometimes

Who hogs the bed?

Well, seeing as we only sleep together on a Friday and Saturday night there isn't much time for hogging the bed, although I have been known to wake up to find myself in the middle of the bed with Mr.P hanging on to the edge for dear life!

Who wakes up earlier?

Mr.P. I am soooooo not a morning person!

Where was your first date?

I suppose you could say Panthers

Who is more jealous?

Neither of us, we don't have time for jealousy.
How long did it take to get serious?

A few months, not much, I knew from the start he was the one

Mr.P for sure! He's a human garbage disposal unit! He always finishes off my meals!

Who does the laundry?

We share that responsibility. Whoever notices a full basket will chuck it in, hang it out, bring it in or put it in dryer.
Who's better with the computer?

Def me. As I mentioned earlier, Mr.P has no idea when it comes to computers, but put him on the Playstation or something like that and he is a whiz! I'm useless at games, esp ones which require me to shoot at something and avoid being shot at the same time. I just can't do it for some reason

Who drives when you are together?

Again we share it. If we are going somewhere we know I'll usually get him to drive, if it's somewhere new then I drive as he has NO sense of direction. I have to put NO in capital letters as it's soooo bad. So bad it's funny actually!

Jade @ Earth to Jade said…
I didn't know you were from Campbelltown! I'm an Ingleburn girl myself :)

Kylez..aka...Mrs.P! said…
@Jade - Yep, I am a south-westie gal! I went to Campbelltown Performing Arts High and St.Andrews Primary. My best friend in high school was an Ingleburn girl, she went to Sackville St Primary I think, funnily enough her name was Kylie too!
30 December 2009 at 21:54

Jade @ Earth to Jade said…
God, talk about small world! I knew a girl that went to CPAHS named Kylie from Ingleburn - would be scary if it was the same girl. She used to catch my bus to and from I'burn station.
30 December 2009 at 21:57