Yesterday I spoke about getting all of our Christmas shopping done last Saturday. And I mentioned how we went to the pet shop on the Sunday because we lost our bearings when we left the shopping centre and went right instead of left.

Anyway, we went to the pet shop on the Sunday to get some seed and shavings for the birds and guinea pigs.

I don't know if I have mentioned before, but Mr.P is a total nature-boy. He loves being outdoors and LOVES looking at insects and animals and birds, whatever he can find outside. He's been saying for a while that he wanted to get a stick insect for a pet, and I was thinking of getting him one for Christmas.

As soon as we get in the pet shop Mr.P heads straight for them and starts checking them out. Then he notices the spiders. He stands there for a little while telling me how cool it would be to have a spider for a pet. I just nod and smile.

So we wander around the pet store for a bit, looking at all the animals. I see this particularly funny looking guinea pig and just have to show Mr.P. He's nowhere near me so I start looking around the store for him.

Sure enough, he's back over by the spiders, chatting to the kid who works there about them. I go over and the look on his face is priceless while the kid shows him all the different spiders they have. He looks so excited and fascinated, like a kid on Christmas morning that I just can't help myself

"You can have one for Christmas if you really want" I say.

"Really? You wouldn't mind?" he asks.

"I don't mind at all. But I'm telling you now, if that thing gets out, I won't hesitate to spray it. And you won't get another one" I'm serious. If the bloody thing gets out there will be hell to pay!
We grab our new spider and the things we originally came to get, pay and head out to the car. On the way home we are discussing what the Spider's name should be. I suggest typical things like Fang (which I think is pretty tough) and then I suggest Charlotte, after Charlotte's Web. I get such a look, so I ask him what he's got.

He tells me that all of our relatively soft pets have tough names (guinea pigs called Hurricane and Skeleton, birds with names like Shot and Smash) that he wants this tough pet to have a soft name. So decides on Cuddles. Suitably soft for a Spider apparently. 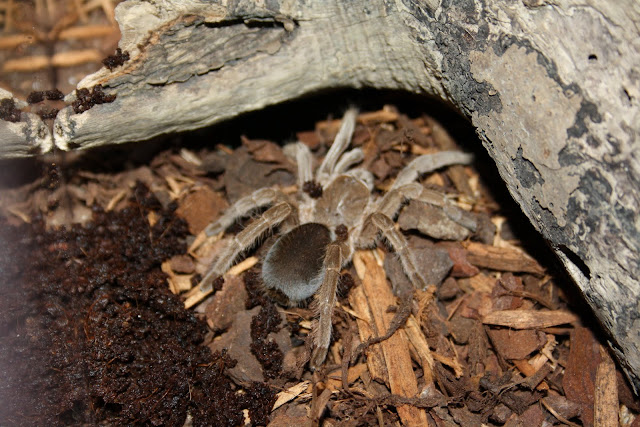 carly said…
glad he {cuddles} is at your house and not mine. thankfully boyfriend hates spiders too. and this would never happen at our house. phew.
24 December 2009 at 13:08

PinkPatentMaryJanes said…
You are one brave and generous wife - I can barely stand to even LOOK at the photo of Cuddles!
24 December 2009 at 13:21

alliecat said…
What PinkPatentMaryJanes said! You are a generous wife, I could not have it in the house, caged or otherwise!
28 December 2009 at 10:57