Her Fearful Symmetry - A Book Review 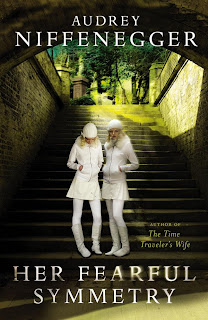 Julia and Valentina Poole are normal American teenagers – normal, at least, for identical ‘mirror’ twins who have no interest in college or jobs or possibly anything outside their cozy suburban home...But everything changes when they receive notice that an aunt whom they didn’t know existed has died and left them her flat in an apartment block overlooking Highgate Cemetery in London. They feel that at last their own lives can begin ... but have no idea that they’ve been summoned into a tangle of fraying lives, from the obsessive-compulsive crossword setter who lives above them to their aunt’s mysterious and elusive lover who lives below them, and even to their aunt herself, who never got over her estrangement from the twins’ mother – and who can’t even seem to quite leave her flat....With Highgate Cemetery itself a character and echoes of Henry James and Charles Dickens, Her Fearful Symmetry is a delicious and deadly twenty-first-century ghost story about Niffenegger’s familiar themes of love, loss and identity.

As the blurb says, it's a "twenty-first century ghost story", but it's not your usual ghost story, and from the beginning you know that this story isn't going to end well for someone. It's no big secret that the ghost in this "ghost story" is the girls aunt, and she's not your typical ghost, no big scares here. Unless you count the shocking truth she has been hiding for over 20 years.

The twins, Julia and Valentina are an interesting pair, and I found them a little hard to warm up to, especially Julia. However this didn't stop me from wanting to follow their adventure. The support character of Martin, the upstairs neighbour and source of the secondary story is far more interesting and his story was the most lovely and romantic, in an odd way. It provides a great background for the main narrative.

There isn't a lot of happiness in this book, but despite that it didn't weigh me down like some, a la Jodie Picoult, and the ending was such that I found my self extremely satisfied that things turn out the way they do.

This was one of those books that made me think about it during the day. Just little observations the author makes through her story about life and love came back to me while I was working every now and then. Niffenegger writes great stories, and creates very convincing characters. Even though the subject matter of this and her other novel is slightly unconventional and 'out-of-this-world' she writes in such a way that you really feel as though that's how you yourself would feel and react if you were in their shoes. It seems completely normal and real. She writes about love in a way that's not soppy or overly sentimental.

I don't know if this review has made sense at all, but to round it off I'll add that, although there isn't a huge amount going on in this novel, and the 'big thing' doesn't really happen until right towards the end, you slowly gain more and more knowledge of the rift that tore two sisters apart and you start to realise where this story is going. It was enough to keep me reading, it was like unwrapping the layers on a pass-the-parcel until the final present is revealed. That is what makes up for the lack of warmth in the story; while it's hard to identify with the charcters at times, and the subject matter is, at its heart kind of dark, Niffengger's writing style totally makes up for that.

I really enjoyed this book, and if you enjoy the way Niffenegger writes then you should like this book too. But don't take my word for it, and don't blame me if you don't like it! Please? It's a little different, but that's what I liked.

Two Thumbs up on this one!
Labels: Books Reviews