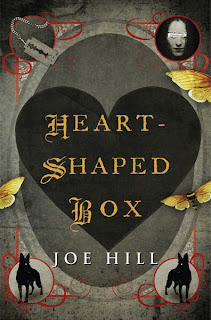 I don't usually read horror novels, not the biggest fan as I find a lot of them cheesy. But this one wasn't bad.

If you're a fan of Stephen King novels then you probably want to check this one out, as Joe Hill is Stephen King's son.

Here's what the back of the book says -


When Judas Coyne heard someone was selling a ghost on the internet, there was no question what he was going to do. It was perfect for his collection of the macabre and the grotesque: the cannibal's cookbook, the witch's confession, the authentic snuff movie. As an ageing death-metal-rock-God, buying a ghost almost qualifies as a business expense...
...Besides, Jude thinks he knows all about ghosts. Jude has been hunted for years..by the spirits of bandmates dead and gone, the spectre of the abusive father he fled as a child, and the memory if the girl he abandoned, who killed herself. But this ghost is different. Delivered to his doorstep in a black heart-shaped, the latest addition to Jude's collection makes the house feel cold. It makes the dogs bark. And it means to chase Jude from his home and make him run for his life...

Billed as a supernatural thriller, I thought about a quarter of the way through that I had this book's number and it was really a Manchurian Candidate-type story.

How wrong I was.

I have a feeling my mind convinced me of that so that it wouldn't allow me to get too creeped out reading this in the house by myself at night!

It really is a supernatural thriller and Hill knows how to bring on the creeps. If I'd allowed it I could have been totally creeped out.

At first Jude doesn't seem very likeable, but I think that's the point. He is an ageing death-metal rocker after-all! I imagined him to be a Marilyn Manson/Ozzy Osbourne-type in my head.

But as the story goes on and you learn more about Jude and his life you start to feel for him a bit, especially when the ghost really starts going to town on them!

Jude and his girlfriend end up going on the run from this ghost, but really, there is no where to run. They're gonna have to face it sooner or later.

I enjoyed this because it was easy to read and fairly fast-paced. I found myself really starting to like Jude and his chicky and wanting them to outsmart this ghost and Take.It.Down!

The only thing I really didn't like was that I thought it should have ended a couple of chapters before it did, but I suppose when it does end you realise it was heading that way the whole time. In a way the ghost makes Judas confront his own demons and become a better person.

And I liked that his dogs names were Angus and Bon (you know, AC/DC).

A Thumbs Up from me on Heart-Shaped Box.
Labels: Books Reviews