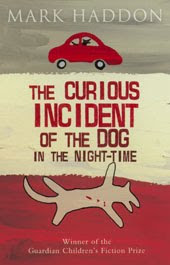 If you haven't read this book yet, you really should. It's so good!

Written by Mark Haddon, it's the story of 15-year-old Christopher, a smart boy, who's just a little different.


Fifteen-year-old Christopher has a photographic memory. He understands maths. He understands science. What he can't understand are other human beings. When he finds his neighbour's dog lying dead on the lawn, he decides to track down the killer and write a murder mystery about it. But what other mysteries will he end up uncovering?

There are a few things I really liked about this book

1. It's written from the point of view of Christopher who is autistic. It's a fascinating insight into what the mind of an autistic child might be like. Christopher can't understand people's emotions and facial expressions and this gives him a very simplistic, but at times very interesting point of view.

2. I like the way the story starts off seeming like it's just a tale of a boy, writing a story. But slowly, you learn more and more about Christopher and his life, his parents, and that what he has always believed about his parents is quite far from the truth.

3. Every character is likable, even when they haven't done such nice things. You can understand the struggles that his parents had and how his father has done all that he could to look after Christopher to the best of his ability.

4. It's very funny. Well, I think so anyway. There were moments when I laughed out loud at the way Christopher would phrase things, and the way he perceives certain situations.

This is definitely a Thumbs Up book and a great read. Maybe not quite suitable for anyone under 16 (there's quite a bit of the f-word!), even though it was originally billed as a young adult novel, but you would most likely find it in the general fiction/literature section of most bookstores.
Labels: Books Reviews

Lauren {Geeb} said…
I really loved this book. I read it a few years ago and the details are a little hazy for me so I think I may pick it up again. Thanks for the review!
25 September 2009 at 04:37

Kirsty said…
I loved this book. I really felt a connection with Christopher and reminds me of being in the UK which is where I was when I read it.
25 September 2009 at 11:25

Cat said…
I'm with you - it's a great book! I loved seeing the world through Christopher's eyes. That kind of quirky fiction is right up my alley. Kind of reminded me, in it's perspective, of another fave, "A Prayer for Owen Meany". :)
25 September 2009 at 21:24