Boys and their Toys Indeed 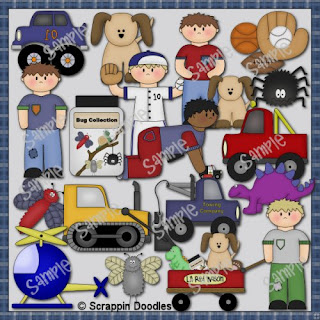 How cute is this clip art from Scrappindoodles.com!
A few weeks ago Elissa over at Elissa is Achieving Her Dreams posted about her Boy wanting to create a Man Cave in her post entitled Boys and their Toys. I think I made some comment about how Mr.P wants one too, a shed, even though he doesn't have a 'making-stuff' bone in his body.
Anyway, Thursday night last week, we are clearing the garage a bit so that the guys coming to do our insulation had a clear path to the manhole. Mr.P asks me if I've noticed the desk out the front of someones place on the way to the shops. I say no I haven't, I'm usually looking at the road while I drive, not random junk.
He says he'd liked to pick it up. I ask why, when my mum has just said we can have their old desk, which actually isn't that old. (He asked me why we needed that one when I told him!)
He says this one has metal legs and a metal top, so it would be perfect to put in the garage as a 'work-bench'.
At this point I'm wondering why he needs a work bench because, as I said, he doesn't really have a 'making-stuff' mentality. Or tools for making stuff for that matter.
Oh, he wants to make stuff, but I don't think he would know how to actually go about making stuff.
Anyway, he then tells me that we need to go to Home Hardware (we had a gift voucher) on the weekend so we can get another set of shelves to he can get some more junk off the floor and tidied. (The shelves didn't happen, but that's another story.)
As we're walking back into the house, he says to me he needs to get the garage all tidied up and sorted out so he can give his dad his 'tool order'. Apparently his dad has two of everything and said Mr.P can take what he wants.
I ask him what kind of tools.
"All sorts" he says, "He's got screwdrivers and wrenches and heaps of other stuff, he even has two angle-grinders..."
"Angle-grinders?!? What the hell are you gonna do with an angle-grinder?"
His reply?
"I don't know, but it's always good to have one, especially when it's free"
WTF?!?!?!? What kind of reasoning is that, I ask myself.
And then I smile.
"You remember that next time you ask me why I needed that book or that piece of furniture, sunshine!"
Labels: Life

Little Eve said…
I say run with this new enthusiasm for tools etc. Could be (will be) very useful someday. Maybe he'll surprise you and himself? My husband is very good at making things. I bought him an angle-grinder once upon a time, which he still jokes about "I mean, what am I going to do with an angle-grinder?" So I had a giggle at your comments.
29 September 2009 at 23:01

Jenn said…
LMAO!! Well, maybe he will learn to fix stuff or build stuff from his father?

LOL...I am more of a fix-it kinda person than my own husband...lol...which doesn't sit well sometimes.

Elissa said…
LOL!! That is sooooo funny!! The Boy has also mentioned an "angle-grinder" but I still have no idea what it is used for. He wanted tools for his birthday so my family gave him tools, because he wanted to start his "collection", well 6 months on and they are all still in their boxes!!
6 October 2009 at 11:38