The Baby-Sitters Club and other Childhood Favourites 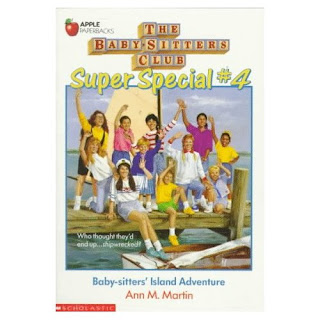 The Baby-Sitter's Club Super Special #4: Baby-sitters' Island AdventureThis was my absolute favourite of all the Super Specials...I really wanted to get stranded on a deserted island!
So I was on facebook the other day and I was invited to do a quiz by my friend B. Now normally I don't bother with that stuff, I usually just go on to stalk some peeps and find out what they have been doing, while not caring enough to actually see them. Don't you hate it when people you went to school with make their profiles private and all you wanna do is see if they have gotten fatter than you? Gah! (Says she with the private profile! I don't need people I went to school with seeing that I got fat!)

Anyway, I digress. The quiz. I had to do this quiz.

It was "Which Baby-Sitter's Club character are you?" (I was Kristy by the way, which was no big surprise!) and because I LOVED these books when I was a wee girl I just had to do it.

I was the biggest fan of the Baby-Sitters Club. I would beg Mum to buy me new ones when they came out (especially the super special ones!) and I would scour the school and city library to find ones I hadn't read. I also read all the Little Sister books, starring Kristy's step-sister, Karen.

I watched all of the tv show episodes and had all of them on tape. I also went to see the movie (and was disappointed it had different girls in it to the tv series) even though I was probably just a little too old for it by then.

I even had the BSC Diary, with fun facts about all the girls (including their birthdays) and hints and tips for starting your own BSC. I convinced my sister and next-door neighbour, plus a few of our friends that we should start our own club.

We failed miserably. Apparently it's NOT a good idea to have 10 and 11 year-old's babysitting other young children unsupervised! Who would have thought?!?! Not me, apparently!

Anyway it got me wondering where my BSC books had got to, coz I would love to read one or two again. I always find it so interesting to read books and watch movies I saw as a kid to see how much my perspective has changed since then (and how much of it went over my head!). So I've asked Mum if there are any still around the house (fingers crossed, so I don't have to borrow them from somewhere, might check the second-hand bookstore actually)

I did have a thought that maybe she had bought some over a little while ago, so I went and checked the back bedroom where I dumped a whole lot of my old kids books. There was no BSC books. Boo.

.......a Degrassi Book! That's right, a novel based on the show Degrassi High! This one is Joey Jeremiah, and I know I had more! I almost died! I think I may just have to read this again too as I loved Degrassi (wasn't supposed to watch Degrassi High, but I still did...apparently when they progressed on from Junior High the themes and issues were too adult for my 11 year old self! Teen pregnancies? Nooooo!)

Anyway, after all this BSC reminiscing I decided to do a bit of a google search on BSC and I found this blog, Claudia's Room. This chick is a 20-something and she decided to read all the BSC books again and blog about it. She hasn't updated since April 08 but before then she blogged a fair bit about the books and some of her observations are hilarious. (If you check out the link go to the bottom of the page and read upwards)

Did you LOVE the BSC books when you were a kid? Did you read any of the Degrassi books? And if not, what books did you LOVE as a kid and why? I'd love to know so I can add them to my wish list...I think I'm gonna try re-reading some of these 'classics' again. I'll let you know how I go.
Labels: Books Life

Nανєєη said…
I wasnt much of a reader as a kid , i was more into cartoons specially dragon ballz :P ... the first book i officially started with was "the alchemist"
1 October 2009 at 04:02

Belinda said…
OMG - I totally lived and breathed The BSC. I loved, loved, loved them! I started reading them in Yr 2 and didn't outgrow them until like Yr 9 or so! Had almost every book - literally hundreds, the videos, merchandise - all of it! When I was 11 and my family went to the US on holidays I got all this extremely cool BSC stuff that you couldn't get here. Man, I was on cloud 9. I actually found my collection a couple years ago in the garage and almost cried because they had got ruined when our garage flooded and they're all yellow and stuck together and stinky and gross. Couldn't throw them out though so they're still there. :-)
And yes, my friends and I tried to start our own BSC too - I wonder how many were actually successful! Haha.
I actually checked out ebay the other day, I'd love to start building my collection again too. Wonder if they'll ever make a revival like so many other 80's/90's toys (Cabbage Patch, Strawberry Shortcake, My Little Pony etc)? They'd totally have a market with all us late 20 and early 30 somethings wanting to relive our childhood!!!
1 October 2009 at 17:52

Chantel said…
I loved BSC too. I have almost all the books. I only ever read about half of them. They are still at mums house at the top of my old bedroom cupboard :P
1 October 2009 at 20:39