I think I'm all Vamped Out!

In the past few months I've read the Twilight books, seen the Twilight movie, read three of four Sookie Stackhouse Southern Vampire Mysteries (just started reading the 4th) that I borrowed from the SIL and been watching, sporadically, Moonlight on the Go! channel.

Each one tells the Vampire story from a different angle and each one picks and chooses the different aspects of Vampire mythology that it uses for it's own convenience.

And I think that's what I'm over. Each one has conflicting Vampire ideologies and when you really think about it, there are so many things that just don't add up.

Don't get me wrong, I'm a fan of sci-fi, so I have no trouble suspending belief for a good story. But how can a Vamp have blood but no heart that beats? Wouldn't it congeal and go yuck? If a Vamp is sort-of stuck in suspended animation, so nothing can change it (ie. they can't age, their hair can't grow), then how can they have sex? How can the blood possibly flow to that nether region to produce the desired effect? Silly things I know, but things that just run through the back of my brain while consuming all of these books and shows.

If you haven't read my blog before then you may have missed my Twilight rant. I really like the idea of Twilight, the love story between Bella and Edward, that they were always destined to be together, yadda, yadda, yadda. I was just so disappointed with the writing. It could have been done so much better (and with way less book!) and it was a real disappointment that I couldn't love these books as much as I wanted to. 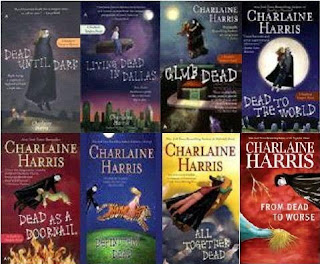 The Sookie Stackhouse Southern Vampire Mysteries aren't too bad, but again, I haven't liked them as much as I wanted to. Charlaine Harris has found her groove (I think), by the third book, but I can't help but feel that most of the reason I enjoyed the third book was because Sookie's boyfriend, Bill, wasn't in this one much. Bill is the most boring Vampire I've ever read! So one-dimensional and cold! Pun intended! But I just find him so boring. We don't know much about him and that frustrates me as it's the Vampires who are usually the most interesting characters in these kinds of books! I much prefer Eric, Bill's boss, but who knows what will happen there. I have a feeling that these books are a Vampire-version, less funny type of Stephanie Plum novel, where they will go on, book after book, with no resolution to the relationships.

The tv show Moonlight focuses on a private detective Vamp and his news reporter friend. I've just been told that this show was cancelled after one season in the US and I can kinda see why. While I like the guy who plays the main vamp, again, he is a bit boring. And soft! he almost dies two consecutive episodes in a row! Hello, isn't he supposed to be a Vampire? Indestructible? Oh well. It's something to watch after Gossip Girl.

I'm thinking I may need to read Anne Rice's Interview with a Vampire. Never seen the movie (gasp!) and never read the book, so I'm wondering if it will be better than any of these. Has anyone read it? Should I bother? Do you think I'll like it?
Labels: Books Entertainment

Cat said…
Oh, I LOVE you and your take on things. I just read your anti-Twilight rant and couldn't agree more. I am a Buffy/Angel fan and think all of these disappoint me because at least Joss Whedon didn't take it all so darn seriously so you didn't feel like you needed to have "all the answers" like you do in these books. As for "Interview" I think it could be a good point of comparison. I read it years ago and didn't love it but didn't hate it either. The movie's not bad at all.
22 September 2009 at 12:01

Ronnie said…
You are cracking me up! Christina Feehan writes some books about the "Carpathians" (she never calls them vampires) and they are some of my favorites. I know several others that have enjoyed them as well. As for Twilight, I liked them, but I really wanted her to wind up with Jacob....I know...not what most people say.
22 September 2009 at 13:18

carly said…
im considering reading the sookie books. as i am quite hooked on true blood. just watched the entire first season in a day.

i have a like for twilight but to me - bella is just nothing fantastic and edward. dont even get me started. at least sookie is her own person and is never "oh dont leave me - i cant live without you."

interview with the vamp i saw quite some time ago + the queen of the damned. both are great. mmm. yes. yes. they are. never read though. might have to.

dont forget about blade. blade is perfect. esp in the 3rd installment when ryan reynolds is in it. yummmmy!

Kayla Brooklyn said…
Did you ever see the Australian miniseries Mary Bryant? The main guy from Moonlight was her husband. I loved him so much in Mary Bryant, I've always meant to track down Moonlight on DVD. Plus it has Logan from Veronica Mars in it, and I loved him in that, so I had high hopes for it.

I've only read the first Sookie book and I really liked it. I'm holding off reading further for a little while in case it follows True Blood as closely as the first book/first season did.

But True Blood is great. Although I recommended it to a friend and she rang me scared about how much sex was in it. I don't even notice that though. It's less serious than Twilight about the vampire stuff as well, closer to Buffy than to Twilight.

I thought Bella should have ended up with Jacob as well. The whole fourth Twilight book made no sense to me. It just felt like an easy out, like she wanted the ending that required the least amount of effort.
22 September 2009 at 18:21

Eilleen said…
Oh what a fantastic read! I had a giggle with your "no heart = no sex". (ooh that's a bit more profound now that I wrote that).

I'm with you - I'm way over the vampire thing. I can see the appeal of Twilight but... yeah.

Oh and I did try to read Anne Rice's Interview with a Vampire but .... yeah. Maybe I'll try to read it again once the vampire hype has died down and my reading of it is not tainted by all the other books on vampires.

I love sci fi/fantasy but this whole vampire thing is a bit overdone at the moment.
22 September 2009 at 19:36

Kylez..aka...Mrs.P! said…
@Cat: I'm with ya on Buffy/Angel, I think the not taking it serious was what made it so good!

@Ronnie: I remember someone (maybe my mother-in-law) telling me about some Carpathian books but I didn't know the author. I will have to check those out.

@Carly_Grace: I've never watched the Blade movies, but I think I will now, esp the third if it has Ryan Reynolds!

@My sister-in-law (who leant me the Sookie books) said that True Blodd was really good too, so I am keen to see it. I've just finished reading the 4th one and it was def the best so far (I think there's like 8 now? maybe?), so I'm thinking I may just read the rest!