What NOT to Read 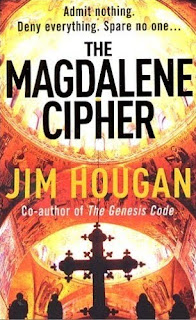 Whatever you do, don't waste your time reading this!

The Magdalene Cipher by Jim Hougan. What can I say but crap, crap, crap. The Da Vinci Code it was not! (I read Dan Brown's The Da Vinci Code when it first came out, before the hype, and while it's ok, it's one of the most over-rated books of all time! I preferred Brown's Angels & Demons to The Da Vinci Code, although it really should have ended about 10 chapters sooner than it did. Using a suit jacket as a parachute while falling out of a helicopter? Just a tad bit over-kill me thinks!)

So anyway, what can I say about The Magdalene Cipher? Ah, don't read it? Don't buy it?

One-dimensional charcters, done-to-death subject matter, tries to pull too many different conspiracies and theory's together, the plot had no momentum or oomph, and the ending? OMFG! What a disapointment! I was so pissed off with the ending. After enduring the nail-pulling that was the rest of the book it was just too much! And by that I mean it wasn't enough. It wasn't anything. It wasn't even a real ending!

Thank God I got it as part of a 5 for $20 deal, otherwise I'd be even more annoyed with this book! Read The Genesis Code instead if you want a read something with a similar theme (the whole bloodline of Christ stuff), he wrote it under his other name, John Case.
Labels: Books Reviews

Kylez..aka...Mrs.P! said…
Thanks DaniV. I figure most people don't want to read about themes and prose or whatever in a book review, if they are anything like me, I just wanna know if it was any good, was it intersting, fast-paced, etc. thanks for stopping by!
9 September 2009 at 13:50