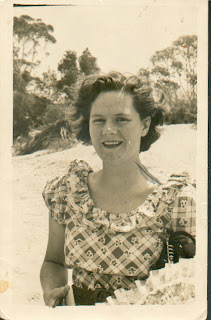 Share with us your favourite memory of your mother or father or another
parent-figure in your life. It may be a wonderful mother-daughter experience you
had with your mum, or something special you've done with your children...
inspire us!

Seeing as I wrote about my Mum for another Blog This: challenge (click here if you wanna read) I thought I would write about my Grandma this time and something she once told me that I will never forget.

Of all the people in this world I’ve ever met, and even those I haven’t, my Grandma will always be my hero.

Grandma dedicated her life to serving and helping others. She ran the Lutheran Welfare Centre, was an Alderman on Bankstown Council (she was even Paul Keating’s mentor when he first started in politics…she got me his autograph when he became Prime Minister, which was pretty cool when I was in primary school!), she studied Communications at University with the belief that a lot of the problems in the world could be solved if we all learned to communicate better with each other.

She was the first volunteer community worker at the Chester Hill Neighbourhood Centre and dedicated almost 30 years of service. She worked for various social and welfare centres, spending many nights picking up drunks from the streets, taking them back to shelters and giving them clean clothes, food and counselling.

She took in many a ‘lost’ teen over the years, some of who are still close family friends, helping with their drug/alcohol addictions and giving them the support so many lacked from their own parents.

The reason I am telling you this is because, considering her early years in life, the fact that she gave so much, without ever asking for anything in return, or feeling like she was owed something, is remarkable.

Grandma didn’t have a very nice life. The result of a rape, her mother couldn’t stand what she represented and Grandma was sent away to live with distant relatives. She spent her childhood confused and alone. She was abused in every way possible, never felt she belonged and was shunned by her own mother.

But despite all this, she never felt sorry for herself. Even throughout her miserable childhood she always had a strong sense that, no matter how bad things may have been for her, there was always someone worse off.

One day, when I was about 17, and Grandma had returned home from another of her numerous hospital stays (on top of cancer and diabetes, Grandma had a myriad of other health problems, and the doctors can’t believe she defied death as many times as she did!) we were sitting in her lounge-room talking about the 40-hour famine (which I was doing that weekend) and all the suffering in the world.

She told me this story that has stuck with me over 10 years and will stay with me for the rest of my life.

When Grandma was really young, about 10-12 years old, and was feeling particularly sad after being sent to bed without dinner (for no reason) she would go through this ritual to remind herself of how lucky she was despite everything.

She would take off her clothes and lye on the cold floor in her underwear. As she lay there, getting colder and colder, to the point where she couldn’t take it anymore, she would get up and put on an item of clothing, telling herself “At least I have a jumper to put on, some people in this world don’t even have that”. And she would repeat this mantra over and over until she finally climbed into her bed, fully dressed, thanking God that despite everything, she still had a roof over her head, clothes, and a bed to get into at night, so already she was doing better than some people.

I know that sounds weird but it really stuck with me. At 12 years old, my Grandma was already less selfish than I will ever be. That story made me realise, that no matter how bad things are, there ARE other people in this world worse off than me, through no fault of their own.

It also made me realise, that if my Grandma, who suffered so much when she was young, could be so un-selfish, and care so much for others, then I could, and should too.

Grandma passed away June 16th 2001. The funeral was held on my birthday, on the 21st. To me, it was a great honour to share the celebration of such an amazing woman’s life on my birthday. I can only hope that I will be half the woman she was.
Labels: Life My Family

carly said…
wow! what a woman!

Kayla Brooklyn said…
What a beautiful post. Thank you for sharing, and a beautiful photo too.
19 August 2009 at 18:30