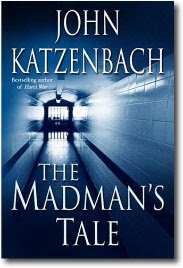 
I quite enjoyed this one, which is good, coz you never quite know with an author you've never read before. This is another one I rescued from the 'chain-bookstore-cull', so it's been sitting on my shelf for a few years, just waiting to be cracked.

When a young female trainee is found brutally murdered in the Nurses' station of the Western State Mental Hospital, Massachusetts, there is apparently no shortage of suspects - a whole hospital of them. One inmate claims to have seen the killer, whom he will only describe as The Angel. Twenty years later,
Francis Petrel, once a patient at the hospital, writes his account of the events
of the murder and it's investigation on the walls of his tiny apartment.As he
writes, he is visited by hallucinations, and by an increasing anxiety at his loosening grip on humanity.

I found this book really interesting, as it's written from the POV of a 'mad' person. From the beginning you feel empathy for Francis, from his struggle to cope on the 'outside' of 'normal' society, to his terror as he arrives at the hospital and finds out what life is really like when your crazy. I don't know if the author has had personal experience of mental illness, or what kind of research he did, but to me it feels like a fairly accurate portrayal of how someone suffering from a mental illness may view the world. The way he describes the drugs he has to take to control his voices and the side-effects they ahve on him are, as I read in another review, eye-opening.


Katzenbach does a very good job of revealing just a little bit of information at a time, about each character and each event, that you really find yourself wanting to continue reading well beyond the normal bedtime! There is a sense that, if I just read one more chapter, I'll get that answer, so you just keep turning the page.


All the characters are very like-able too, which for me is important. Especially the main character. If I don't like the main character I don't like the book as much. From the get-go you like Francis and want to see things turn out well for him. You also feel yourself building a small camaraderie with other patients in the hospital and take on the feelings they have towards the doctors and staff (with the exception of Big Black & Little Black).


The book is written as a flashback, with glimpses of Francis' ever-fragile reality interspersed. As he tells the story of what happened at Western State, he falls further and further back into his own 'madness' and these small glimpses and conversations he has with the ghosts of his past while in his 'present' (denoted by italics in the book), are written in just a way that it doesn't detract from the fluidity of the story.


All-in-all I thought it was a really good read and I would definitely recommend it.