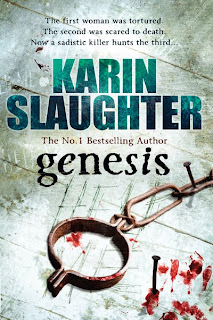 No, I'm not talking about the Book of Genesis from the Bible.

I'm talking about Genesis, the new thriller from Karin Slaughter.


I picked this up in Big W a couple of weeks ago after having finished my first Slaughter-novel a few weeks earlier.


I quite liked the protagonists of Fractured, the first one I read so I thought I'd give another one a go.

Three and a half years ago former Grant County medical examiner Sara Linton
moved to Atlanta hoping to leave her tragic past behind her. Now working as a
doctor in Atlanta's Grady Hospital she is starting to piece her life together.
But when a severely wounded young woman is brought into the ER, she finds
herself drawn back into a world of violence and terror. The woman has been hit
by a car but, naked and brutalised, it's clear that she has been the prey of a
twisted mind...
...When Special Agent Will Trent of the CIT returns to the scene of the
accident, he stumbles on a torture chamber buried deep beneath the earth. And
this hidden house of horror reveals a ghastly truth - Sara's patient is just the
first victim of a sick, sadistic killer. Wrestling the case away from the local
police chief, Will and his partner Faith Mitchell find themselves at the centre
of a grisly murder hunt. And Sara, Will and Faith - with their own wounds
and their own secrets - are the only thing that stands between a madman and his
next crime.


The story opens with an elderly couple driving along a back-road at dusk. They hit what they think is a deer, but what in actual fact is a naked and brutalised woman. The woman is rushed to Grady Hospital, and Special Agent Will Trent just happens to be cooling his heels while he waits for his partner, Faith, who has also been taken to hospital after fainting. Will sees the woman arrive and knows straight-away that this is way more than just a typical pedestrian vs automobile accident.


The thing I like about Special Agent Will Trent is that he has a unique disability. Unique in that I have never read another book where the main character and chief sleuth is illiterate. Having been bought up in an orphanage from the age of 5 months (he was found in a trash-can after his mother was murdered and she tried to hide him) he was shunted from state care to foster families and back, returning to the orphanage each time with yet more injuries from his 'carers'.


Will overcomes this disability in a number of different ways, but it's always a constant struggle to keep it a secret. Only his hard-assed boss Amanda, and his partner Faith Mitchell are aware. Faith, on the other hand has her own problems. Pregnant at age 14, she now finds her self at 32 with an 18-year-old son who's in his first year of Uni. Having overcome that hurdle to work her way through the local police ranks, and then to the Georgia Bureau of Investigation, she now finds herself pregnant yet again, and a diabetic to boot.
Juggling all these personal trials, Agents Trent and Mitchell set out to find a sadistic murderer, with a penchant for using plastic garbage bags in a way the manufacturer definitely did NOT intend (let's just say, it's pretty gross, and I thought I'd read pretty gross before!).


I usually judge crime fiction on how soon I guess the murderer. I guessed the murderer about 3 quarters of the way through, although just after I thought I'd figured it out my suspicions were confirmed by a very obvious clue.


I also quite liked one of the more minor players, Dr Sara Linton. I realised after I finished reading Genesis that Sara Linton is the protagonist in a number of other novels Slaughter has written. I think I just might check out on of the others featuring Sara to see what they're like.


Stay tuned for the verdict!


If you like crime fiction then I definitely recommend grabbing this one. With a enough pace and suspense to keep you turning the page, Slaughter tells a sick tale with a slick cast of characters.
Labels: Books Reviews

Kayla Brooklyn said…
Hi! After you mentioned this author a while back I stumbled across one at a second hand shop, it was Indelible.

The main character was Sara Linton and a local Sheriff, it was set something like 15 years after she leaves Atlanta (Although if this one is recent maybe she returns to Atlanta?)

It was a good read but it did talk about some stuff that must have happened in earlier books. I think I'll have to track some of them down now as well. That's for talking about her books, I'm a picky crime reader, but this was great!!
25 August 2009 at 10:24