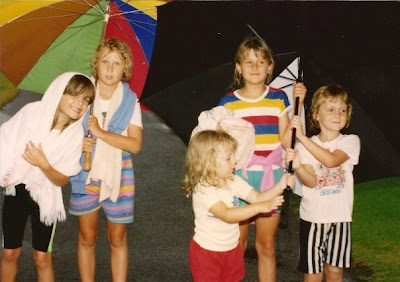 Me & My Cousins, Singin' in the Rain in Windang, sometime in the early 90's (I'm the one with the towel on my head!)
Blog This: Challenge 5 -


Everyone loves Holidays. Everyone has had a holiday - be it a great big backpacking adventure, a luxury weekend away,a caravan trek as a kid with the family taking in Big Bananas, Big Prawns, Big Pineapples et al, Camping in the neighbours yard under the stars for a few nights. Elaborately planned holidays, impromptu 'let's get out of here' holidays. Blog about a holiday you've had that stands out - adventure, relaxation, family, friends, disaster, hilarious events! Who were you with? Where did you go? What made it so memorable? Share a photo if you want!

When I was a kid we didn't go on 'big' holidays. The 'biggest' holiday I went on was to QLD when I was 15. That was a pretty cool trip, especially as it was my first time on a plane. I remember when we were getting off I said to my sister (who had flown to Adelaide with mum before) "What do I do with the head-phones, can we take them with us?" And she's like "Yeah, you can't leave them on the plane for other people, gross!". So I gethered up all our headphones and we got off. While we were standing around my Dad asks me what the hell am I doing with all those headphones (yes he really did say 'what the hell' and Mum wasn't happy!) and he told me to go and hand them all back becuase you're not supposed to steal them off the plane! My sister just laughed at me and thought it was the most hilarious thing and thought I was an idiot! How was I supposed to know, I bet heaps of people walk off with them!

The QLD holiday was a great holiday, but the best holidays we went on were to my Grandma & Grandpa's caravan at Windang. It was right on Lake Illawarra and we could go fishing and ride our bikes and explore the caravan park all day. Swim in the pool, go to the beach, it was the best. What really made it the best though was having Gma & Gpa and all my cousins there, we used to have so much fun playing together. We even went to the Plaster Funhouse one time and picked out plaster moulds to paint. It was awesome! Once when I was about 8 and my cousin and I went to the toilet block together I asked her what all the marks on the door were (chips in the paint) and she told me that everytime you use the toilets you had to leave a mark on the door so they knew how many people had been in there and once the door was covered they painted over it and started again. So as we leave, she gets the key and scratches 2 little lines in the paint, next to other lines. Naturally, I believed her. I idolised her, she was a couple years older and the big sister I never had. I believed every word she said. Needless to say Mum wasn't too impressed to come out of the toilet a few days later to find me carving two marks in the paint in the door! I think my cousin was even less impressed when my Mum told her Mum what she'd said!

The funniest thing that ever happened when we were staying there was when I was about 10. My sister and I were riding our bikes around and had gotten the key to the toilet block. Mum asked us to chuck one of our sisters dirty nappies in the big dump-bin on the way. So I'm riding along with the keys and nappy in my hand, we roll up to the dumpster and I launch the nappy bag into the bin. Problem was, I launched the keys in at the same time! Thankfully the bin had only been emptied that morning so there was pretty much nothing else in it. Either way, there was NO WAY I was getting in there to get those keys back! It stunk to high heaven and there was what looked like green and brown slime all over the bottom of it. So, being my little sister I naturally forced her to climb into the dumpster in her thongs, under threat of physical pain (I was basically a bitch-child until about 13 when I grew a conciense(is that how you spell it, I think there's another C in there somewhere!)). Anyway, my sister climbs in, the minute her thongs hit the floor she's sliding, but somehow manages to stay on her feet, gets the keys, and I pull her back over the side. She's almost in tears. I paid for it later. Believe you me! She may seem like the nice, quiet sister to everyone else but she is devious! And she learnt it all from me! 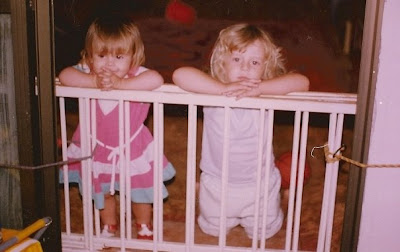 I just had to include this pic, it's so cute! This is my sister and cousin at the baricade to the caravan annex door. It had to be put up so they couldn't get out to the road and my cousin (the bigger one) doesn't look happy about it!
Labels: Life My Family Travels