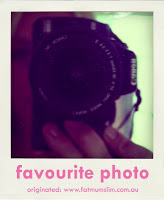 "It's really simple. I love how every photo tells a story. Some short stories, some long tales. I want to know what is your favourite photo of yourself. Everyone has one. The photo they look at and smile. It reminds them of something, some time, some place. A moment in time.

So share the photo, share the story and then tag three other people. I want to see photos and stories all around the blogosphere."

I've been tagged by Carly over at Everyone Wants This to put up my fav photo, something that fat mum slim has started up (click on the pic to go to her blog)

As soon as I saw Carly tag me I had to start thinking. I am a photo-nut! I have so many and take so many, I probably have pver 20 photo albums now, all of which hold 200-400 pics! So trying to choose my fav pic was not easy. In the end it was a toss-up between two, so I might put the other one up another time.

Anyway, here's the photo I chose, and I'm sorry to say it has a long tale to go with it- 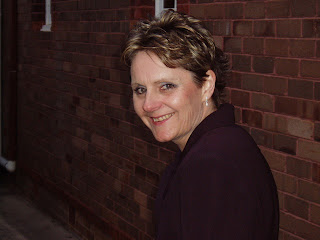 This photo is of my mum, Merrion. It was taken in August 2003 at her second wedding. My mum & dad divorced when I was in year 12 (2000) after being married since 1978. Although I tried to hide it, this really blew me out of the water. The day Mum told us, my sister and I had actually been saying to a friend of ours that even though they fought, we never thought they'd get divorced. How wrong we were!

For a long time I was really angry at mum (and dad too, but he wasn't around to remind me as much) and I couldn't understand how she could throw away 22 years of marriage which had resulted in 5 kids. My 17-18 year old mind just didn't understand and couldnt process it. I vowed I would never get married, as what was the point if it was gonna just be a waste of 20 years (or so I thought).

The day of mum's 2nd wedding was really nice and lovely, it was a beautiful winter day and mum looked absolutley stunning and so happy. The day went by in a blur and by the time it was time for mum and Michael to leave I'd had enough. Dave and I left and I didn't get further than around the block when I burst into tears. I was devestated, because it meant now that mum and dad could never get back together, which is all I wanted.

I LOVE how happy and content my mum looks in this pic. It is the best picture ever taken of her. When I think back about that day now I am so happy. Now that I'm older and able to see my Mum as a real person and we've become so much closer, I understand now why she had to do what she did. And what she did is the best thing for her and us kids. Michael, my step-dad is a fantastic man and he makes my mum so happy, I'm so glad she met him, it wasn't long after mum got divorced and she was at her lowest. He lifted her out of that. I love watching them together, it's like they've been married forever.

My mum has given so much to so many other people than herself that she needed to do something for herself and making the choice to have a happier life is what she did. This photo reminds me of how much my mum has done for me. It reminds me of how strong she is and things she had to go through to find her ultimate hapiness. We 5 kids are mum's life, and now she has a man who makes her as happy as we do. She's an inspiration to me and I only hope I can be as good a mum and person as she is.

So that's my long tale.

Sounds like my parents. Mine separated when I was a young teen after 25 years of marriage. I blamed my Dad for many years. Now that I'm older I know that 25 years was probably too long for them to have been married and they should have divorce WAY sooner then that, they just were not right for each other at all. My mum isn't remarried, but my dad is now, and both mum and dad seem much happier these days. It's so hard to understand these things when you're young.
13 June 2009 at 12:37